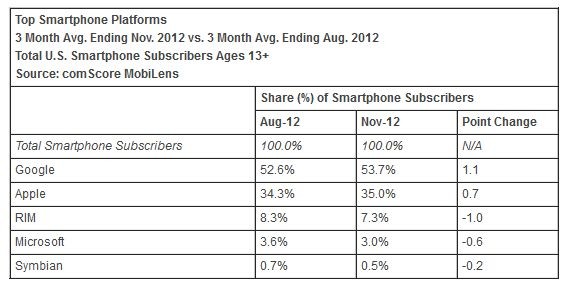 Even though Microsoft and its hardware partners Nokia and HTC launched new Windows Phone 8 products in November, it was apparently not enough to keep Microsoft's share of the US mobile phone market from going down.

That's according to new stats from ComScore, which reported this week that Microsoft's share of the mobile phone market was just 3.0 percent in the three month period ending in November. That's down from the 3.6 percent market share it held at the end of August, and down from 4.0 percent that it had at the end of May.

ComScore's new data shows Research in Motion's market share for its Blackberry smartphone OS took a bigger drop. ComScore said it now commands 7.3 percent of the industry at the end of November, down 1.0 percent compared to August.

Google's Android OS remains the top smartphone operating system with 53.7 percent, an increase of 1.1 percent in the last three months. Apple's iOS is second at 35 percent, which is a market share increase of 0.7 percent.

ComScore claims Samsung is still the biggest mobile phone hardware maker in the US with 26.9 percent of the market in November, up from 25.7 percent in August. Apple took over the second place position on the chart with 18.5 percent, dropping LG down to third with 17.5 percent. Motorola was in fourth with 10.4 percent and HTC was fifth with 5.9 percent.