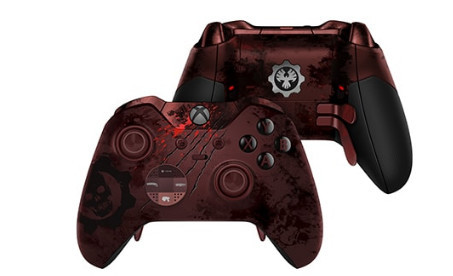 Microsoft announced at E3 2016 the arrival of a new Xbox Elite Wireless Controller in the form of a limited edition Gears of War 4 model. Today, Gamestop and the Microsoft Store are making the controller available for a pre-order price of $199.99 USD.

The controller will offer the same customization options as the original Elite Wireless Controller, but will be themed in a crimson red motif and will also come with a variety of Gears of War 4 themed thumbsticks, D-pads, and paddles. Those who purchase the controller will also gain access to some digital goodies in the form of "one unique multiplayer lobby emblem and three Gear Packs for special in-game items".

If just owning the controller isn't enough for you, you can opt to own a limited edition Gears of War 4 variant of the Xbox One S, which should arrive sometime in October. The controller is currently available for pre-order and will arrive on October 4th.