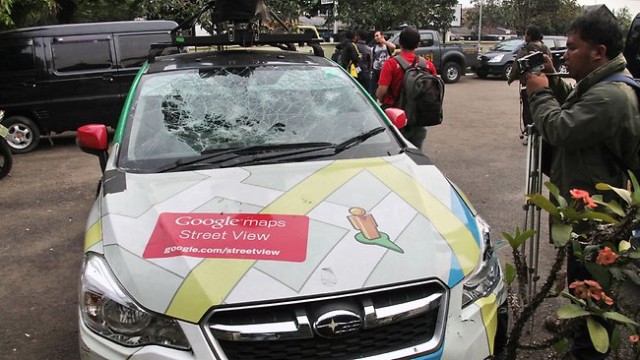 A photo is taken of the battered Subaru hatchback after the triple crash and run.

An Indonesian Google street view employee has been released from custody after he crashed into two vehicles, while trying to flee an earlier accident.

The incident, which occurred near Jarkarta last Wednesday, was caused by a trademark company car famous for its distinct colourful exterior and a camera on the roof. After hitting a minivan, it was reported that the employee initially accompanied the driver to the garage but fled shortly afterwards.

"He said he was scared the repair fee would be high, so he got in his damaged car and fled," Bogor district police operations chief Hendra Gunawan said on Saturday.

The chief said the minivan driver immediately got into his vehicle and pursued it for three kilometres, until the Google car crashed into a second minivan. The driver attempted to flee again, but soon crashed into a parked truck “before he gave up” and was taken in by authorities.

"He has been released and all the payments for the vehicles have been sorted out. The damage to the first one would probably have cost 200,000 rupiah (AU$19) to repair," he said.

This is not the first time the vehicles have caused trouble. The incident comes only days after Google was forced to go ahead with a civil lawsuit which claimed the street view cars breached privacy by wiretapping WI-FI networks. Earlier this year, the company was fined €145,000 for collecting emails, passwords and other data through the street view service.