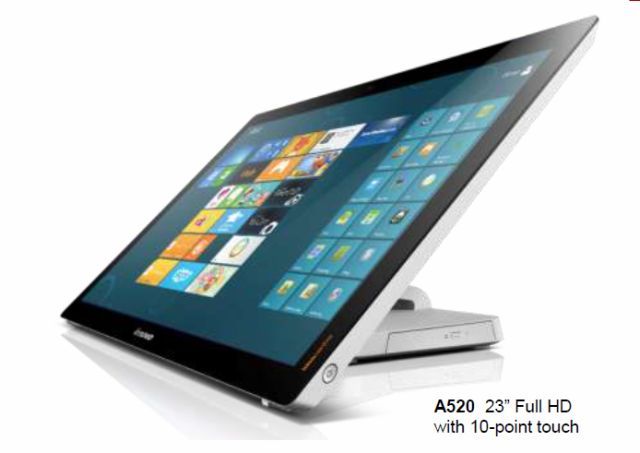 Lenovo isn't quite done yet with their new PC announcements. Today, as part of the company's IFA trade show presentation, the company revealed a new series of all-in-one PCs under the IdeaCentre brand that will support Microsoft's next operating system. One of them is the IdeaCentre A520, which has a 10-point 23 inch touch screen with a resolution of 1920x1080.

The A520 can be configured with an Intel Core i3, i5 or i7 Core processor, up to 8 GB of RAM and up to 1 TB of hard drive space. You can also put in an optional NVIDIA GeForce graphics card. Pricing for the A520 will start at $999.

Lenovo has also announced plans to release the IdeaCentre B340 and B345 all-in-one PCs. The B340 and B345 models both have a 21.5 inch 10 point touch screen screen with Intel processors and a feature called OneKey TV, which allows users to quickly switch the PC into becoming a high definition TV without having to power up the PC. Pricing for the PCs will start at $599.

The new IdeaCentre all-in-one PCs will be released in October, just in time for the launch of Windows 8 to the general public.