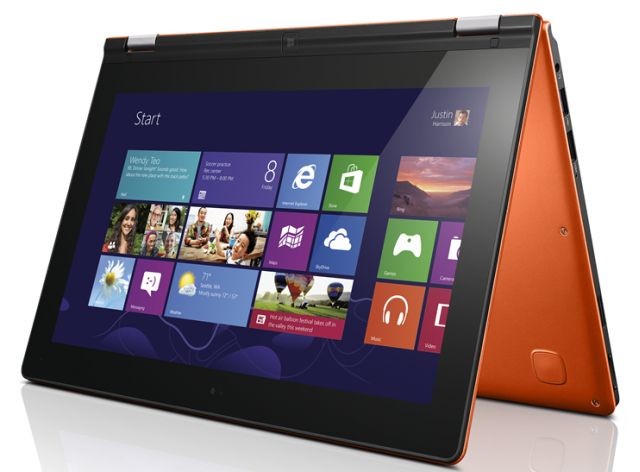 First announced in January during CES 2013, the Lenovo Yoga 11S hybrid Windows 8 PC is finally available for online pre-orders. This smaller version of the previously launched Yoga 13 will officially go on sale in Best Buy stores on June 23rd.

Lenovo's press release states that the 11.6 inch, three pound Yoga 11S has the special hinge feature that is a part of both the Yoga 13 and the Windows RT-based Yoga 11 that allows the touchscreen to flip around and be used as a tablet, along with other configurations such as 'tent mode', shown above. Buyers can choose to have an Intel Core i3, i5 or i7 processor, along with either 128 or 256 GB of SSD storage and either 4 GB or 8 GB of RAM. There's also an Intel HD Graphics 4000 chip inside. Lenovo estimates that the PC has a battery life of up to six hours.

The Yoga 11S starts at $799 for the Core i3 version, with prices increasing if users want to have one of the other two Intel processors. Buyers can choose to pick from two separate colors for the PC: Silver Grey and Clementine Orange.