Notebooks (otherwise known as laptops) are the front lines of mobile productivity. If you’re in college, you probably have one. If you do any work outside the office, you most likely use a laptop. If you want your computer to exist anywhere outside the confines of the top of your desk, you have a laptop. It’s been that way even since the idea of mobile computing even entered the collective conscience of the connected world. Many companies are ditching the desktop altogether and handing out laptops to its employees, and kids are using them as primary note taking devices in elementary school.  So, when Fortune reports that notebook sales have actually dipped below the x-axis this month, people immediately start pointing fingers. 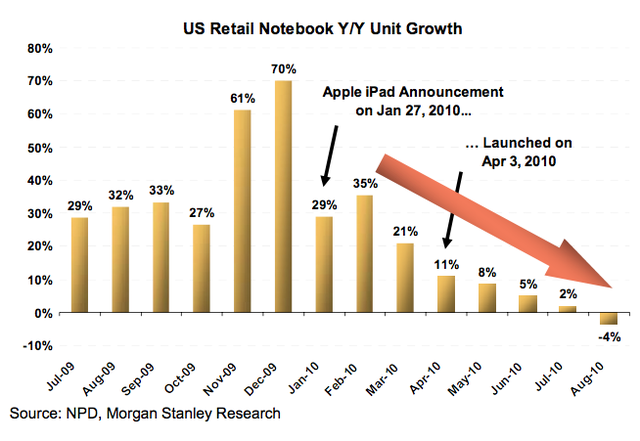 The iPad, and the general resurgence of the tablet market, is seen as the primary factor in the eight month decline in Notebook sales. The decline started the month after the iPad was announced, so it isn’t such a farfetched idea. This is backed up by comments from Best Buy CEO Brian Dunn and Morgan Stanley’s Katy Huberty. According to Dunn, "internal estimates showed that the iPad had cannibalized sales from laptop PCs by as much as 50 percent."

While it’s tempting to place blame on the tablet market, there are other factors as well. Tablets are definitely a growing market, and people are trying to find ways to replace their notebook with a touchscreen device, but the drop in sales doesn’t necessarily reflect that people are buying more tablets. If anything, there has been a steep decline in marketing departments as far as notebooks go. As we come closer to the tablet war of 2011, manufacturers are trying to shift the focus of the consumer to the upcoming market storm. That doesn’t mean people are replacing their notebooks, nor does it mean that tablets are cannibalizing notebook sales. As soon as the tablet wars plateau and the market becomes saturated, you can bet that notebooks will be back on top of marketing department priority lists. 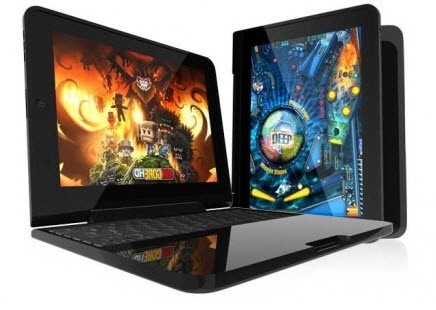 Another factor in the decline of the notebook this year was the rise of Android and faster mobile networks. Android has grown up this year to become a serious threat to Apple, and carriers are selling Android phones like hotcakes. This ultimately is another marketing distraction, as the current advances in touch capability, display formats, and mobile processors will eventually plateau as well. Once again, Notebooks will take over where smartphones left off.

It’s interesting to note that netbooks were also the next best thing that was supposed to kill the mobile market of notebooks. For a little bit, netbooks really were a threat to notebooks. Only when people started realizing that the screen was too small or the processor was too underpowered to be a true notebook replacement did the market start tapering off and eventually decline. You see, as much as people want to love the form factor and sleekness of a tablet or a smartphone, neither of these has actually replaced the functionality of a Windows or Mac OS computer. So, the current frightening collapse of the notebook market is likely only temporary. Until businesses and people who seriously depend on mobile productivity can reliably use a tablet, notebooks aren’t going anywhere.

Poll: Do tablets spell doom for the notebook market? Vote above in the sidebar.