Lionhead’s latest addition to the Fable franchise, Fable III, attempts to continue the legacy of your family in Albion. The incredibly hyped RPG hit consoles on October 26th 2010, coming in regular packaging, or could be purchased as a Limited Collector's Edition. The Limited Collector's Edition came in a pseudo-book which if opened reveals the case to the game. There is also a "hidden" compartment in the bottom which can be pulled out to reveal Fable playing cards and a "Guild Seal" coin to aid you in tough decisions. 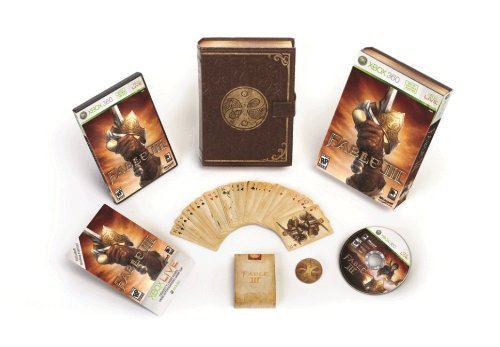 Your father was a true hero and restored peace to the land, now he has passed on and your brother, Logan, is in charge of the kingdom. Conditions have been drastically worse since your father was in power, and now the Kingdom of Albion needs a leader to turn to that will help them successfully overthrow the tyrant, your brother, and improve life for everyone. Choosing to play as either a prince or princess, you are guided along in your quest by an old soldier, Walter, who sees the errors in Logan's ways and wishes to help you in your quest for a rebellion. Along the way to the crown, you must go and help out people in various towns in Albion to prove that you care and win over their support.

Note: the next paragraph contains spoilers.

After fighting your way to the crown, you learn of a strong force called "The Darkness" is coming to drain life from Albion in exactly one year, which is what your brother was attempting to protect against all along. As King or Queen, your job now is to make decisions on how to save your Kingdom, but you choose the price the people must pay. Along the way of gaining support, you have also made promises. Many of these promises come at a cost to the overall Kingdom and if you keep all of them then millions of people will die. You need to make the choice to either help out the people, or take care of your Kingdom, but something must give.

First starting up the game it has a very strong feeling like this is still Fable II, except there is a greater social aspect. Now you have the options to hold the hands of people and guide them around. The lands are all also very similar to Fable II, and you can even see the progress that has been made from when Fable II took place to Fable III. Lion head’s new game offers the unique experience to connect with characters, get them on your side, and cure corruption. The familiar gameplay created a welcoming environment and was very pleasant to use. The controls are fantastic and work quite well with what is needed in the game. While initially it was not as grabbing as Fable II, once I got into it I just simply wanted to continue and play more.

Playing like Fable II is nice as it causes you to remember those fun times; however Fable III follows its predecessor a little too closely. In Fable II, there is a time when you must participate in this challenge called the "Crucible." In the Crucible, you must defeat a certain type of enemy as fast as you can and there are multiple stages. In Fable III, this same concept is applied, except it is being used as a punishment. That section felt rushed and simply re-used. Also in Fable II, you are sent off to the Tattered Spire, in which you are to serve as a guard and are cut off from the world. In Fable III you are shipwrecked in the wretched land of Aurora where "The Darkness" runs amuck and terrorizes the citizens. This is again, a rushed and re-used piece of gameplay.

Replay value isn't quite what Fable II had, as playing my second time through as an evil female, no matter what choices I made it didn't seem to sway the storyline of the game or my ability to do anything that much. Being evil just provides a more negative atmosphere, but none of the gameplay changes that much. 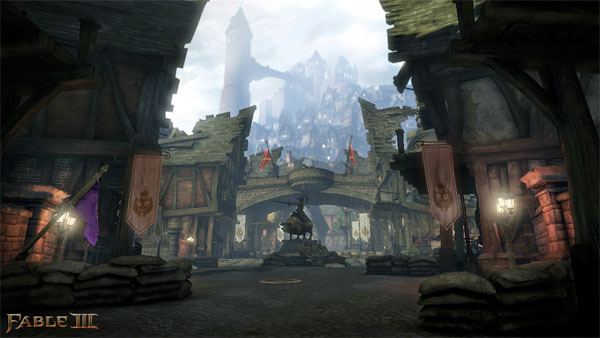 Weapons and money in this game are not handled in the same way as the previous two games at all. I had the Collector's Edition, so perhaps that is why essentially every weapon was given to me, but my thought was that Lionhead simply wanted to focus on the weapon customizing feature and that is why you are handed all of these weapons to choose from. As you use your gun, sword, hammer, or whatever it may be, it will begin to morph depending on how you use it. Weapons also typically have upgrade options, where you have to accomplish something and then the weapons will upgrade. For me, I wasn't even aware I had accomplished certain feats and all of a sudden I am getting messages that my hammer was upgraded. Somewhat confusing and missing the feeling of knowing I had accomplished something were prevalent.

When being the ruler, your time as ruler is over quickly. So quickly in fact, that you don't get a proper amount of time to see all the changes you were hoping would come to your attention, and then after the game is over, there simply is nothing more. You are still King (or Queen), but the only options left for you are to go on tiny quests which add nothing except extra random game time. While I was going through as King, I didn't know how long I'd be able to make choices for and was partially making my decisions based on the impression that I would be able to introduce new ideas later and rebuild after the war. This is not the case in any way, which leads me to wonder why I should have even cared about the people at all if in the end being a tyrant would have surpassed the requirement to save everyone.

I'm not sure why, but this game has been plagued with bugs. Holding hands with someone can cause massive slow-downs in your ability to get from one place to another, or can prove tricky to get through narrow places. I found that to prevent this, I would try to find the nearest set of stairs as that would "separate" you enough so you could run at full speed again and still have the person you are leading catch up.

Another annoying portion was how relationships were formed. They followed the same pattern of having to do certain tasks or quests in order to prove yourself to the person. This isn't a problem, until for some unknown reason you return to the town after finishing the quest and your person is mysteriously gone. In my case, I was having a difficult time finding a Hand Mirror, and by the time I found one, my would-be wife was gone. This is possibly due to me purchasing different homes, one of which was owned by her, but on the map it still told me to go back to the town and meet up with the missing wife. 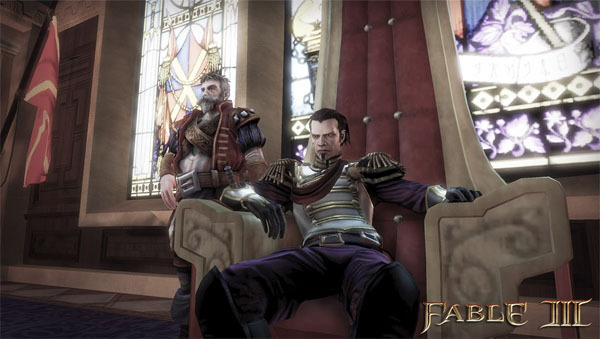 This was a game that people hoped would continue the magic of Fable; however to me it feels like it was simply Fable 2.5, and a rushed update at that. The game also had a social aspect, where other friends on your Xbox who have played Fable III would have data sent to you showing their achievements and progress, such as "Killed Hollow men: Mr3gg5alad: 49 Midnightspear: 37." While neat at first, towards the end of the game it somewhat spoiled for me the unknown that would lay ahead, as I knew I only had a limited number of each person left to kill, and when my numbers got close to the person who had beat the game, I knew I was also close to the end.

It was extremely short, if I subtract the hour spent looking for the hand mirror, it was just an eight hour game. With all of this being said, I still enjoyed myself quite a lot as it still was Fable, and the thought of a revolution was cool. Ruling and making choices provided some interesting insight on what real leaders have to go through, and now I have more respect for them.

The bottom line is that the faults, bugs, and unpolished feeling the game had ruined what could have been a fantastic addition to the series. All of the elements were there, just if Lionhead had taken more time in thinking everything through and fixing bugs, this could have been one amazing game. It still comes out as a good game, and if you have never played Fable or Fable II, you may enjoy it more not knowing how much it is repeating itself. If you are looking for a fun and short game to pass the time, perhaps pick up Fable III, although with how cheap you can get Fable II for, if you are brand new to Fable, go for Fable II instead.