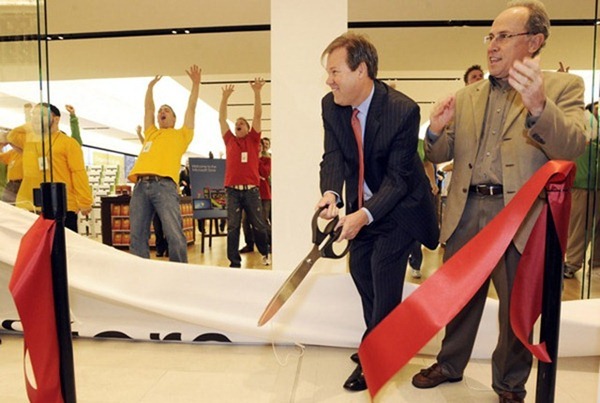 Today Microsoft opened its biggest Microsoft Store yet, and directly across from an Apple Store. This is Microsoft's sixth location, with a seventh planned in Bellevue, Washington on November 18, just down the road from Microsoft's headquarters in Redmond.

The brand new Microsoft Store in Bloomington, Minnesota, located inside the Mall of America is 8,600 total square feet, and features all Microsoft electronics and software, including Xbox 360 slim, Kinect, Windows Phone 7, Office 2010, Windows 7 and even Microsoft Surface.

Microsoft's store opening kicked off at 9AM, where thousands attended to witness the opening ceremonies and ribbon cutting. The three-day celebration will feature a performance by Kelly Clarkson today, with Kinect events and prizes tomorrow and Windows Phone 7 available in stores on Monday.

Microsoft also opened a brand new store on Thursday in Oak Brook Mall, in Chicago, Illinois. Celebrations for the Oak Brook store were similar to that of the Mall of America store, which featured performances from Colbie Caillat, and NFL star Devin Hester of the Chicago Bears, and MLB star Ernie Banks of the Chicago Cubs.