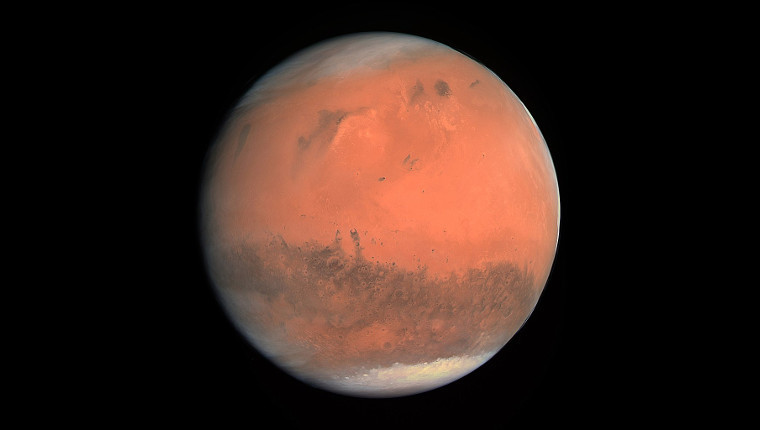 Scientists have found the first persistent water source on Mars, 1.5km below the planet’s south polar ice cap. The researchers said that the lake is about 20km across and at least one metre deep, which apparently qualifies it to be a lake according to the lead researcher. The news is quite exciting for the prospects of life on the Red Planet, because water is essential for life.

Discussing the findings, Professor Roberto Orosei, from the Italian National Institute for Astrophysics, who led the study, said:

“It's probably not a very large lake. This really qualifies this as a body of water. A lake, not some kind of meltwater filling some space between rock and ice, as happens in certain glaciers on Earth. … Getting there and acquiring the final evidence that this is indeed a lake will not be an easy task. It will require flying a robot there which is capable of drilling through 1.5km of ice. This will certainly require some technological developments that at the moment are not available.”

This is not the first time that scientists have discovered signs of water on Mars but this is the first time that a persistent water supply has been found, which is noteworthy. The lake was found with a radar instrument called Marsis on board the European Space Agency’s Mars Express orbiter which arrived at March in 2003.

Dr. Matt Balme, from the Open University, is optimistic about the finding. He said:

“What needs to be done now is for the measurements to be repeated elsewhere to look for similar signals, and, if possible, for all other explanation to be examined and - hopefully - ruled out.

Maybe this could even be the trigger for an ambitious new Mars mission to drill into this buried water-pocket - like has been done for sub-glacial lakes in Antarctica on Earth.”

A few years ago, biologists found more than 3,500 unique gene sequences in Lake Vostok which had been isolated for more than 15 million years; Lake Vostok gets no sunlight with it being 4,000 metres below the ice and has a recorded temperature of -89.2c, showing life to be hardy.