Newcomer 'Flying Wild Hog' has been secretly working on an early Christmas present for PC gamers, the game is called Hard Reset. Some of you may have already heard of it, as a 1GB playable demo was released last week (yes, a demo before release, like the good old times!). The preview contained a portion of the first level, offering roughly 20–30 minutes of gameplay using a wide range of weapons.

What makes Hard Reset an exciting release is not just that it's a PC exclusive title, of course, but so far we've been pleased with its somewhat basic gameplay mechanics and overall feel. Also, the game has been built using a new previously unseen game engine called “Road Hog” that has been built from scratch, making it a serious investment for the developer. 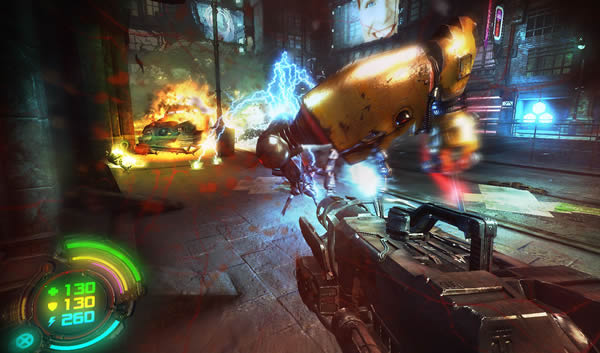 With the playable demo being the first thing to really put Hard Reset on our radar, the game itself is somewhat unknown to us. That said, Hard Reset is incredibly fun to play, moreover the game looks impressive, featuring quality graphics, despite it's a DX9 only title. Let’s move on to see how we tested the game...