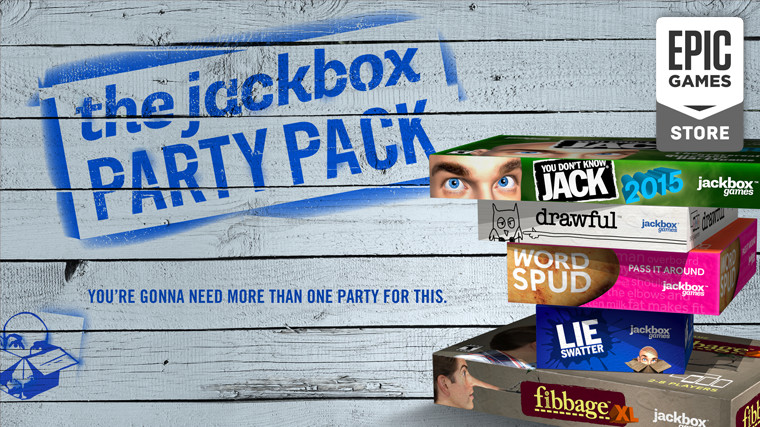 Yet another fortnight, yet another free game from the Epic Games Store. Only, this time, it’s not just one game: it’s a pack of five. What Remains of Edith Finch is being replaced by The Jackbox Party Pack (2015), a bundle of five party games developed by Jackbox Games, formerly known as Jellyvision Games.

You Don’t Know Jack (YDKJ) was first introduced to the world in 1995, described by Jellyvision (as it was known at the time) as “the first and only trivia game to ask about Shakespeare and Scooby-Doo in the same question.” As it garnered popularity over the years, the YDKJ franchise was born; bringing newer versions of the game every few years to whatever platforms that were popular at the time. Ouya, the infamous console, had YDKJ as one of its launch titles, as well.

YDKJ, though, is only one game that comes in the pack. Here’s everything that’s included:

You Don’t Know Jack (2015), Fibbage XL, Drawful, and Word Spud are suited for friends at a party on a couch, but Lie Swatter supports up to 100 players, a crowd that would likely not fit on a couch. That is, perhaps, great for streamers who wish for their audience to participate in some of these games. It’s possible to use any device – from a computer to a phone or tablet – as a controller for these games, even over the internet, which helps make that feasible.

The Jackbox Party Pack (2015) is available for both Windows and macOS on the Epic Games Store at the price of free for the next two weeks. Here’s how the pack is described:

For 1-100 players! Your phones or tablets are your controllers! The team behind YOU DON’T KNOW JACK presents FIVE guffaw-inducing party games in one pack!

If you wish to claim The Jackbox Party Pack, here’s its store page. It will be free to claim until February 7, which is when Epic will put Axiom Verge on offer for its next giveaway. Its soundtrack is available on Bandcamp starting at $5 as well, if you don't have the time to play the game and would rather "imagine the game in your MIND PALACE!" or wish to support the developers.