The Warhammer universe has descended upon the Humble Store with a new bundle featuring seven of its games and some expansions. Total War is sadly missing, however.

Warhammer 40,000: Dawn of War and Talisman: Digital Edition arrive with the $1 or above tier. The Blood Moon, Harbinger, and Sacred Pool expansions for Talisman are also included.

Admittedly, the 'pay more than average' second tier is probably the most worthwhile of the three, with it bringing Warhammer: End Times - Vermintide, Warhammer 40,000: Space Marine Collection, as well as Blood Bowl 2. Opting for this will set you back $6.65 at the time of publishing this feature.

The final $12 tier adds on Warhammer 40,000: Dawn of War III, Battlefleet Gothic: Armada, and the Stromdorf expansion for the original Vermintide.

Sticking to the Humble theme, the Day of the Devs Bundle that features games like RiME and Hotline Miami 2 still has a couple of days left on its counter. Don't forget that the Humble Monthly Bundle is meanwhile offering Metal Solid Gear V Definitive Experience and Cities: Skylines plus an expansion for $12 as early unlocks. 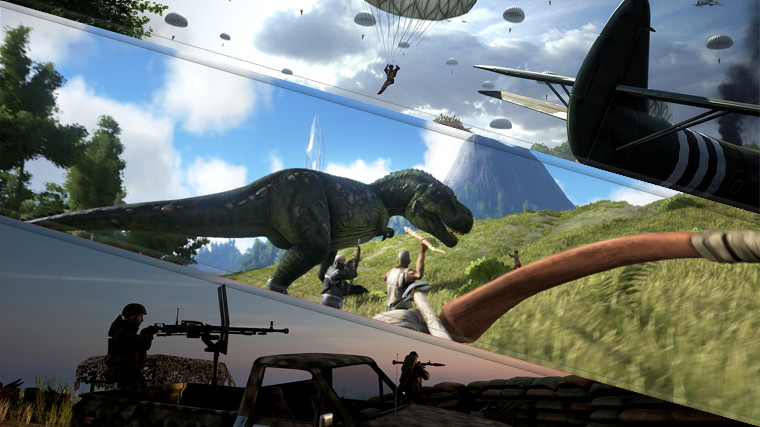 It's another massive free event filled weekend featuring games from a variety of genres, and up first are three military simulators, but vastly different ones.

VR headset owners aren't left behind either, as the early access game Onward is available to try out for tactical shooter fans who want a more 'in your face' experience.

Moving on, ARK: Survival Evolved is also having a free weekend promotion, giving everyone a chance to try out its dinosaur taming multiplayer world. Of course, we can't end without a battle royale free event as well, and the Mad Max style vehicle-based early access title Fractured Lands steps up to the task this time.

With the beginning of the weekend arrives a wide assortment of sales from all sorts of stores, and below, we have a selection of handpicked games that are near or below their historical discount rates. Note that the Destiny 2 base game giveaway that kicked off last week is still going strong, so be sure to pick it up through Battle.net if you haven't yet.

Let's now get down and have a look at some of the DRM-free deals that are on offer this weekend. Some of these sales are part of a new GOG midweek strategy promotion, so they aren't discounted for much longer. Although it's not a game, The Witcher 3: Wild Hunt soundtrack concert, which is normally a $10 value, is currently being given away for free on the GOG store's front page.

With that, this PC game deals post has come to an end - until next weekend that is - and some of you hopefully had enough self-restraint to not add too many new games to your ever-growing backlogs. There is, of course, an enormous amount of other deals all over the interwebs if you comb through it hard enough, so try to keep your eyes open for those, and have a great weekend.