Privacy is an important aspect of one’s life, whether it be in the real or digital world. The more options you are given, and therefore more control, the better.

Regardless of if you’re concerned about the amount of data collection, or simply want to tweak things even more for other reasons, Microsoft has taken a few steps to help you with that in the latest Windows 10 update.

In this comparison, we'll cover what has and has not changed between the Creators Update and the previous major version of Windows 10, in terms of setup experience and built-it privacy settings. At the end, there will be two other options outlined, for those wishing to further enhance privacy. First, let's see how things were back in August of last year, when the first of the Redstone series of updates was released, the Windows 10 Anniversary Update.

Released on August 2, 2016 for PCs, the Anniversary Update brought a fair few changes to the user experience, among which a new dark theme across UWP apps, improvements to the Action Center, Windows Ink, and even new security features. All in all, it was a push towards more customizability, building upon the changes from Threshold 2, known as the November Update.

Speaking of customizability, users are given a first taste of it during the setup of the Anniversary Update. If you're in a hurry, you can choose to use Express settings, which basically leaves them all set to whichever default Microsoft has chosen.

For this to be a fair comparison, the customize option was chosen, which at first reveals some general privacy-related settings:

Next, settings pertaining to connectivity and diagnostic data show up, with the latter outlining how each toggle state affects the sending of data back to Microsoft:

The last privacy related option relates to browsing activity, more specifically browsing protection via SmartScreen and browsing history. Via page prediction, the OS aims to improve your experience, and as such, sends non-identifiable browsing data back to Redmond. This particular phrasing might seem a little worrying for a non-technical user, since the software giant does not clarify exactly what type of browsing data is actually being sent.

Once the shiny new install is ready and you're all booted up, it's time to fiddle around with settings, most importantly those related to privacy. If you really wish to, most of these settings can be turned completely off, although some features will not work properly.

Even so, privacy concerns were targeted at Microsoft by the EFF, calling for the firm to "listen to these concerns and incorporate this feedback into the next release of its operating system". Even pirates were weary of the data collection, going as far as to ban Windows 10 users.

You may remember that a couple of years ago, there was a bit of confusion regarding the November Update suddenly being made unavailable. Although it initially did not state so, Microsoft later admitted it had pulled the update due to an issue affecting "an extremely small number of people who had already installed Windows 10 and applied the November update". The issue in question was related to user preference, in that in those few cases, settings were not retained following the upgrade process. To see if the issue may pop up in this update as well, all privacy settings (save for background apps) were set to their lowest possible setting.

Microsoft's next major iteration of Windows 10, the Creators Update is just around the corner, so has the firm listened to the users' concerns? Let's see.

Although it's officially available starting April 11, Microsoft gave folks who wanted to the opportunity to manually install the Creators Update on April 5. A day later, it could be installed via Microsoft's Update Assistant. For the purposes of this comparison, the upgrade from version 1607 to 1703 was done through the second method.

The process was straightforward, with the new privacy-related setup experience which was promised to users earlier this year making an appearance near the end:

As can be seen in the image above, when these settings are turned off, users get a brief, but much more helpful description of what effects their preference will have on certain features of the operating system.

One thing to note is that as opposed to the previous feature update, the Creators Update removes the Express settings option completely, in favour of what can be seen above. Not only that, but these new privacy settings cannot be skipped.

After completing the process and being thanked by the Assistant for updating to the latest version of Windows, checking the privacy section of Settings was next.

Although the positions of the toggles were retained, changes have been made to the overall layout, most noticeably by the addition of "Tasks" and "App diagnostics". There is also now a sort of sidebar on the right, similar to what you would find in Control Panel, which contains links to give feedback, get help and review the privacy policy.

An interesting thing happened in regards to the layout of the General and Feedback & diagnostics tabs. In the case of the former, even though a local account was used (both when upgrading to the Anniversary and the Creators Update), some options do not show up in the newer version. Specifically, those relating to typing and writing, filtering for Windows Store apps, and Bluetooth. The image shows changes between settings in Anniversary Update (left) and Creators Update (right).

As promised with the launch of the privacy dashboard back in January, the Feedback & diagnostics section of the new update nixes the third option for data collection (Anniversary Update on the left, Creators Update on the right):

Since they were mentioned above, here is what the new Tasks and App diagnostics sections look like: 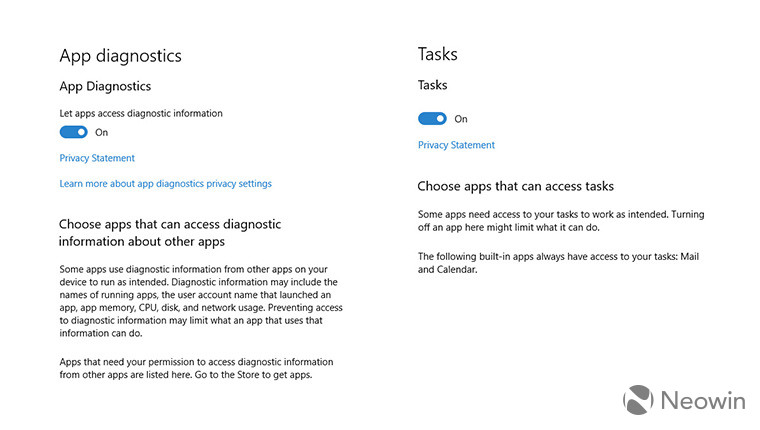 Although these improvements are welcome and certainly offer a little more insight into what's being done with the collected data, they might not be quite granular enough. Microsoft previously stated that these changes were implemented due to user feedback. Although no doubt true, it's ludicrous to dismiss the simultaneous and perhaps more pressing influence of the Swiss investigation, whose requests will be reflected in Redstone 2 (Creators Update) and the as of yet unnamed Redstone 3, due later this year.

This is all well and good, but what if you need something a little bit more in regards to privacy, both in terms of the local and online sides of your digital life?

Unless the data on your device is very important (medical files, lawsuit case files) and thus needs to be handled with extra care, this feature isn't for you. However, another step towards securing your hard drive or SSD and ensuring local privacy is with the use of Windows' built-in BitLocker feature. BitLocker, which debuted back in Windows Vista, allows for full disk encryption and was, according to Microsoft at the time, "100% secure". Of course, no technology is without flaws, but luckily that's what patches and updates are for.

If not offline, but rather online privacy is what you're more concerned with, a promising case can be made for the use of a VPN, or Virtual Private Network. Basically, think of it as BitLocker for your internet traffic. Not only does it encrypt the data transferred between your PC, its servers and your intended final stop (website, streaming service, etc), but also allows you to access region-locked content, as well as to hide peer-to-peer activity. The latter is frowned upon in many countries.

What needs to be made clear from the get-go, however, is that VPN providers are as many and as varied as snowflakes. Not all are created equal, and not all are certainly as trustworthy. An in-depth analysis of what you should be looking for when selecting such a provider can be found here.

It's impossible to please everyone all of the time, a task even more daunting when we're taking about something as complex as an operating system. Though the tweaks made to privacy settings are no doubt a step forward, some may still view them as insufficient.

The Creators Update as the name implies, improves most upon features geared towards creative types. Who knows, if displeased users are vocal enough, we might see a Privacy Update in the future.