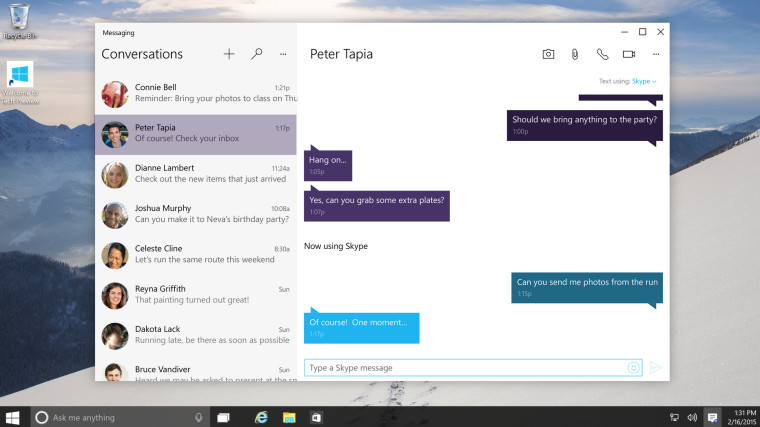 Back in January at the Windows 10 event in Redmond, the Skype team announced their plans for the OS and how the service will be built-in on the desktop and mobile iterations of the platform. If you have used the latest build to be released to Insiders, you will know that the Messaging app is not present.

More than not including the app in the latest builds, the company is not talking about the app either. Their blog has been mostly silent about future plans since this announcement, which is a bit perplexing as well as frustrating, their app looks intriguing but alas, here we are at the end of May with no further evidence of the apps existence.

A couple of things to note about the image you see above, it's a mockup from the team. We know this by simply looking at the date, 2/16/2015 when the post went live in January and there are other markers as well if you look at the alignment, etc.

Seeing as Microsoft has not come forth with any information, I pinged them to see what they had to say on this topic and if the app would ship with Windows 10 this summer; they responded with the following comment:

We believe in delivering a set of Skype experiences optimized for user needs, and are excited to introduce Skype as a part of the new Windows 10 experience. We are working hard to put the same Skype experiences you know and love in the places you need it most so users can do more with the key people in their lives.

A non comment about the current status of the app, which means the next best thing to do is start poking around the Redmond campfires to see what I could dig up, since Microsoft won't throw me a bone.

According to one source, they described the mockup as the 'vision' for Skype, but upon starting to build the desktop app, the reality of timelines for completion and the current pace of Windows 10 development proved to be a large setback for the desktop app.

One insider said they would be very lucky to have any app in Windows 10 for the upcoming RTM release, while another said that they did not foresee SMS continuity coming to the platform in 2015. A final source said that they believed all the teams inside Microsoft were in bug jail, meaning from here on out its squashing bugs, making minor refinements and no new major features which is likely why Gabe Aul is much more confident of people running this OS on a primary rig.

Until Microsoft comes forward with more information, the best we have is that the app will not be in the release of Windows 10 when it hits RTM; since there has been no sign of it so far. Seeing as there is another wave of features arriving in the October-ish timeframe (Edge Extensions are part of this), it won't be too long after release that this app will have another chance at making a grand entrance.