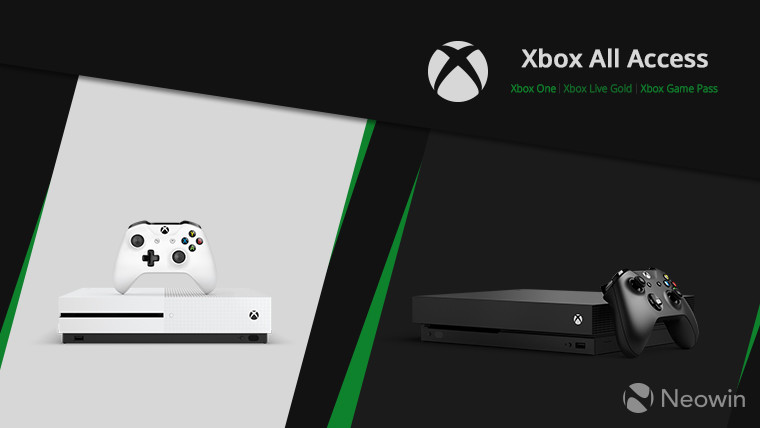 Last year around this time, Microsoft introduced Xbox All Access, a leasing program where you could get an Xbox One console, and two years of Xbox Game Pass and Xbox Live Gold, starting at $21.99 a month. It was discontinued at the end of the year with a promise to return in 2019, and now it's back. Microsoft announced the return today, and the big change is that there's now an upgrade path to the next-generation Project Scarlett console, which is slated for release next holiday season.

It's also cheaper this time, starting at $19.99 a month for 24 months. In the U.S. and the UK, you can choose between an Xbox One S, Xbox One S All-Digital Edition, or Xbox One X, while you can select Forza Horizon 4 bundles of either the Xbox One X or Xbox One X in Australia. It also comes with one Xbox Wireless Controller, and a two-year subscription to Xbox Game Pass Ultimate, which combines Game Pass, Game Pass for PC, and Live Gold.

After you've been on the program for 12 months, you'll have the option to upgrade to Project Scarlett, at least in the U.S. and UK. And with Scarlett slated for launch in holiday 2020, you'll want to jump in now if you want to be eligible to upgrade at launch. You'll also have to have made 18 payments, which means that if you do upgrade after 12 months, you'll need to make six months worth of payments. And of course, you'll need to trade in the console that you're currently leasing.

Oddly enough, those in Australia don't have the upgrade option. If you're in Australia, your only option will be to buy out the console that you're leasing, and start a new lease.

Xbox All Access will be available tomorrow in Australia, November 5 in the UK, and November 18 in the U.S. For Australia, you can get it in-person or online at Telstra. In the UK, you can get it in-store at GAME, or in-person or online at Smyths Toys. Finally, in the U.S., you can sign up online from Amazon.com. We've reached out o Microsoft for clarification on whether this will also be coming to the Microsoft Store.