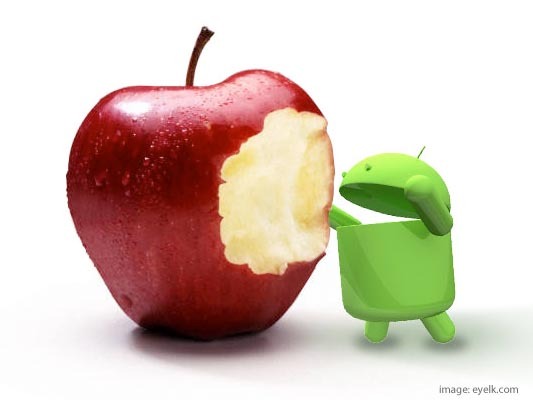 Browser speed has always been a talking point in the never-ending mobile OS war(a war we hope doesn’t end anytime soon). According to Blaze, a website optimization company, Android’s native browser blows iOS’s Safari out of the digital water. After 45,000 tests, Blaze was confident in saying that the Android browser was faster to load a page 84% of the time. The tests focused on real world sites and shied away from using the classic benchmark tests, like the SunSpider Javascript test and Acid. Blaze wanted to see how the browsers stood up to real time browsing.

The test was done using an iPhone 4 and a Google Nexus S. All websites loaded were Fortune 1000 company websites, and the sites were loaded more than once, and on different days. The testing was done over WiFi, so carrier discrepancies can be ignored. There were multiple devices running the tests, and the median time of each site across the devices was used as the result.

Android beat Safari 84% of the time, and had a median load time that more than a second faster (2.144 vs. 3.254), making it 52% quicker. However, Android’s dominance wasn’t as pronounced on mobile sites, where the browser was only 3% faster. Despite the fact that both Android 2.3 and iOS 4.3 have much improved Javascript engines, this didn’t affect the overall load time relative to previous versions of the OS. So, while the Java benchmark tests would show marked increases in performance, it didn’t translate to real life advantages.

Blaze does acknowledge that a perfect page load test is practically infeasible. The amount of unique variables that factor into browsing performance is staggering, and trying to standardize each one would be a waste of time and resources. So, while this isn’t definitive by any means, it definitely favors Android, and there’s something to be said for that.

Update: Blaze has admitted that the test wasn't as accurate as they first thought. In fact, the entire test is based on custom browser apps that completely disregard performance updates to the Safari browser. Apple came out and said as much in response to the study. Blaze admitted that they were, indeed, using the custom browser instead of the actual mobile Safari. However, they've voiced disapproval of Apple's "embedded" browser, and updated their claim to say that Android's "embedded" browser is better than Apple's. That claim doesn't have nearly the same clout as before, and Blaze hopes that apple will update their embedded browser to enable the tests to be completed fairly.