The image of Android users as people who seek out danger and live on the edge may not be far from the truth. That's the image that Verizon has been trying to project in some of their ads for the Droid Razr and a new study from Websense suggests that it's an accurate portrait – but in ways that Verizon had rather not project.

The study suggests that while iPhone users are happy to stay within the bounds of Apple's walled garden, enjoying music and video from legitimate sources, Android users spend more times exploring the web's less reputable districts.

Unlike iPhone users, Android owners spend more time reading about guns and 'exploding shuriken' than they do playing Angry Birds, and many of them venture out in search of information on hacking and other 'illegal or questionable' activities, as shown in the chart below. Almost all iPhone users get their apps exclusively from Apple's carefully crated App Store, but Android users have no problem getting their apps from a wide variety of unsanctioned (and sometimes illegal) marketplaces. 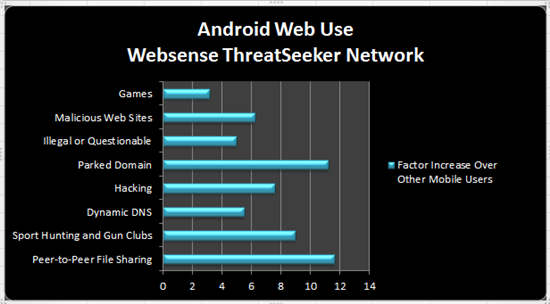 While a lot of fuss has been made about Google's lack of tight control over what apps get into their marketplace, users are really sticking their neck out by getting their apps elsewhere. It's remarkably easy for a legitimate looking Android app to be repackaged with malware and most users won't know the difference until they are already infected.

A lot of questions have been raised about the security of Google's mobile OS. McAfee recently reported that Android was shattering records for mobile malware, with almost all new viruses being targeted at it. While Microsoft's Windows Phone and Apple's iOS remain relatively safe, some security experts are suggesting that it might be wise to keep your Droid protected with security software, as reported over at Monsters & Critics. Some have gone so far as to call Android the 'smartphone Windows of the future,' referring to the high number of security threats targeting Microsoft's venerable OS.