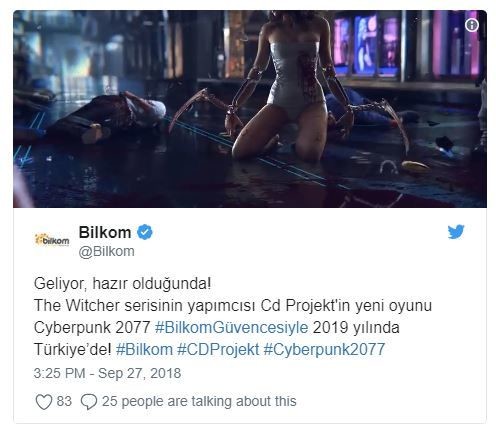 The reveal of Cyberpunk 2077 by CD Projekt Red at E3 2018 earlier this year was one of the most satisfying parts of the gaming convention, but the lack of a release date attached to the title was also quite a sore point. That the following nearly hour-long gameplay footage of the game, too, came with little in the way of release details, was even more infuriating.

Thankfully, a potential misstep from one of the studio's publishing partners in Turkey, Bilkom, may give us some indication of when players can finally traverse the spectacular open world crafted by CD Projekt Red. A now-deleted tweet from Bilkom marked 2019 as the year of Cyberpunk 2077's release. A rough translation of the Turkish tweet seems to give an assurance that Bilkom will be bringing the game to Turkey by 2019.

While the 2019 window may be quite the source of excitement for gamers, it may also be rather inaccurate. That is, at least, if you go by the word of studio president Adam Kiciński, who in a statement earlier this year suggested the game was not even in an alpha stage at E3. The creator of the original Cyberpunk game, Mike Pondsmith, too, suggested the game may be years away, so take the above tweet with a large grain of salt.