A few hours ago, Microsoft officially announced that the title of their first original Halo game for the Xbox One console will be Halo 5: Guardians. Now, the official Halo website has posted the first concept artwork for the game along with a few more hints about what players can expect when it comes out in the fall of 2015. 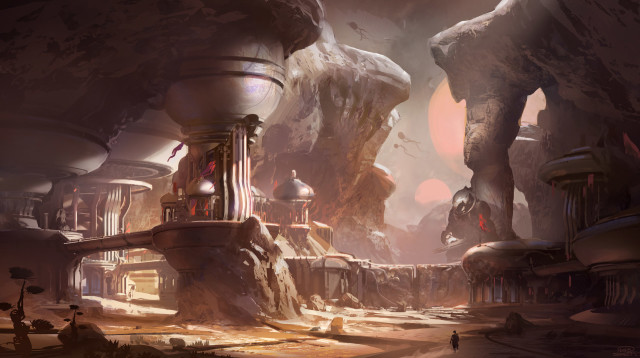 In a post on the Halo Waypoint blog, Microsoft's Frank O'Connor included the concept art piece as part of his update on the game. It shows what looks like a highly technological civilization on a desert planet, which is certainly keeping with the art style of what has been revealed already for Halo 5: Guardians.

O'Connor also confirmed that developer 343 Industries made the decision to release the game three years after the successful 2012 launch of Halo 4 for the Xbox 360. Originally, Microsoft has announced that the game would be out in the fall of 2014. He added:

But we’re not just making a new game in that three year span, we’re also making a new engine. During the development of Halo 4, we pushed the Xbox 360 and the engine to its limits, and we were happy with the way we were able to make the Halo universe look. The Xbox 360 still has a few tricks up its sleeve, even now. We are moving to a whole new platform with the Xbox One – a new architecture, new graphics hardware and bluntly some new ways to think about gaming, period.

More details about Halo 5 will be revealed in just a few weeks at E3 2014. There are also rumors that Microsoft may announce plans for an Xbox One graphical remake of Halo 2 to be released this fall.