When the first Windows 7 beta (build 6801) was announced at PDC in late 2008, everyone was excited, myself included. Within a few days after release I was happily running my very first version of Windows 7. Right around new years day, Microsoft released the first public beta (build 7000) of the next gen OS. Since Microsoft was kind enough to share it with me, I decided to share it with everyone I know. Starting with my immediate family computers and expanding to my network of friends and coworkers. I went on a upgrading frenzy, installing Windows 7 on just about any PC I could get my hands on. Everything from an overclocked 3 Ghz quad-core PC to a 1.3 Ghz laptop.

What have I learned from these installation adventures? I've learned that Microsoft has produced their most stable, reliable & speedy codebase to date. PC's that struggled just to run Vista's basic functions, now can run Windows 7 with all of its features (including Aero). By creating an OS that scales remarkably well, Microsoft has not left the owners of older PC's out in the cold. Allowing them to upgrade their OS without buying a new PC, or even adding additional hardware to their existing PC's. Windows 7 also has one of the easiest install\upgrade processes I've ever seen. With some machines fresh installing Windows 7 in less than 15 minutes.

To further cement my uber-nerd status , I created a spreadsheet to catalog all of my Windows 7 installs. Using a unscientific scale, I graded the PC's on everyday usability and performance. Out of all the PC's on the list, only two lacked the GPU power to run 7's Aero features & none of them had any major driver issues. 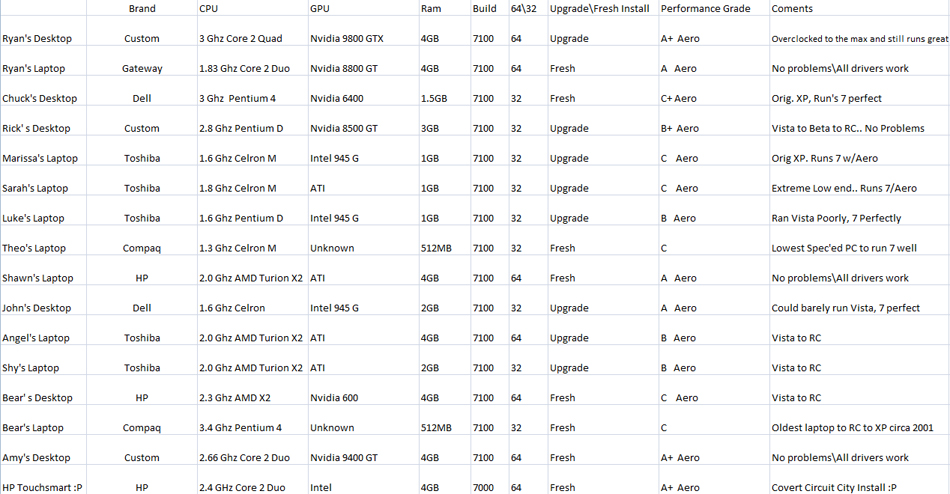 As you can see from the test results above, Windows 7 runs on very wide variety of form-factors and styles of PC's. If you have not already, download and install the RC of Windows 7. Which you can find here

How does Windows 7 run on your computer? Let us know in the comments.