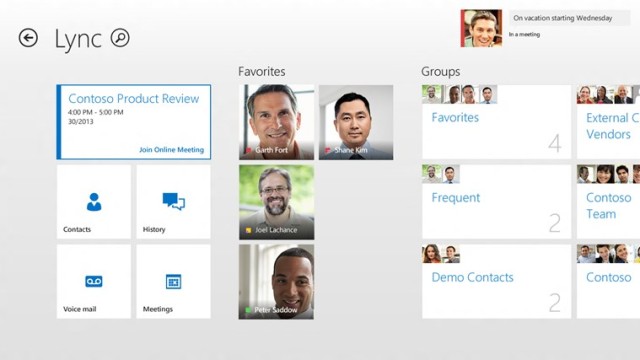 The last major update for the Windows 8 Lync app was released in February. Today, the Windows Store has a new version of Microsoft's business-themed messaging app available for download with a number of new features.

The change notes for the new version reveal that the Lync app now lets users join any online meeting without needing a prior Lync account. It also lets users see their Outlook meeting schedule and join any of those meetings directly from the app. Users of PowerPoint can now present slides through the Lync app and preview those slides privately when someone else during the meeting is making their presentation.

The app now finally allows users to see their contacts and start online chats while it is set up in the "snap view" mode in Windows 8. The app offers better accessibility for displays that have high contrast modes. Finally, there's been some unnamed bug fixes and performance improvements.

In May, Microsoft announced that users of the Windows and Mac desktop clients for Lync could chat with Skype users and vice-versa. So far, there's been no word on when the Windows 8 versions of Skype and Lync will gain that same cross-communication support.