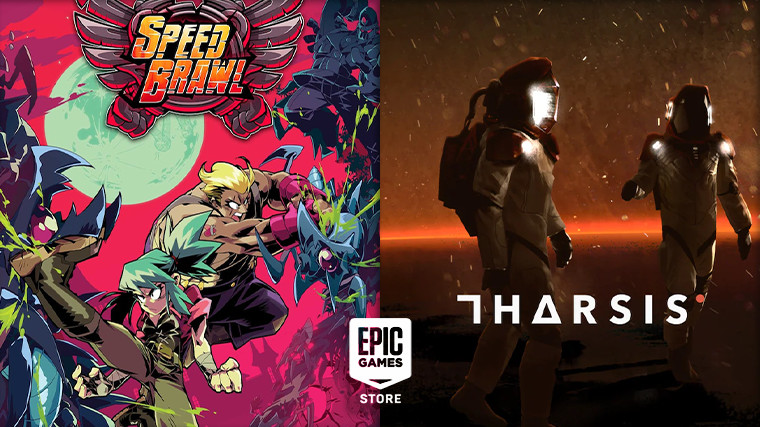 The latest games to enter Epic Games Store's weekly giveaway promotion are Speed Brawl and Tharsis. Unlike previous weeks, there weren't any surprises this time. The two games are free to claim for anyone with an Epic Games account, and they arrive as replacements for last week's Sheltered and Nioh Complete Edition.

Speed Brawl is a 2D-side scrolling combat racer about beating up enemies while keeping the momentum high. There are six brawlers to choose from when dashing through the campaign, and the game also supports local and online cooperative play.

The title was originally supposed to be a part of a previous giveaway but was delayed. With it finally being here, the Epic Games Store describes it as follows:

Speed Brawl is a 2D combat-racer about moving fast and hitting hard! Maintain your momentum, build combos, and unleash powerful moves. Find your own fighting style, and assemble the best team of brawlers ever seen. Then do it all again faster. Faster. FASTER!

Released in 2016, Tharsis arrives as a strategy game that puts you in charge of a group of astronauts investigating a signal from Mars deemed to be extraterrestrial, but while getting there, the spaceship suffers a disaster. The gameplay has you rolling virtual dice to fix issues and protect the crew.

Epic Games Store's description of the game says the following:

A mysterious signal originating from the Tharsis region of Mars set us on a frantic mission. Who sent it? And why? Impossible questions, but in them lie the key to humanity’s survival.

The minimum requirements for the two games are as follows:

The giveaways of Speed Brawl and Tharsis will remain available to claim on the Epic Games Store until September 23. The identity of the next freebie has been revealed to be The Escapists.