The Adobe Reader Touch app for Windows 8 is still one of the most popular free apps for Microsoft's OS; it has been in the top 50 most downloaded free Windows 8 apps in the Windows Store since it launched in December. In April, Adobe finally added a way to print PDF files from the app. 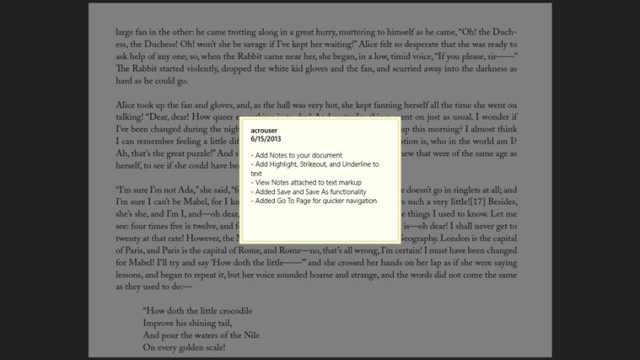 This week, the app received yet another big update in the Windows Store, adding quite a few new and highly requested features. One of them as you can see in the screenshot above, allows users to add notes to PDF files for the first time. Users can also view notes that have been attached to text markup.

Yet another new feature that Adobe Reader Touch owners will greatly appreciate in this new update is Save and Save As. Yes, you can now finally save any changes you make to a PDF document. There's also a way to highlight, strike out, and underline text in PDF files with this new update.

Finally, the Adobe Reader Touch puts in a new "Go To Page" so users can quickly navigate to any page in the document, which is helpful with especially large PDF files.