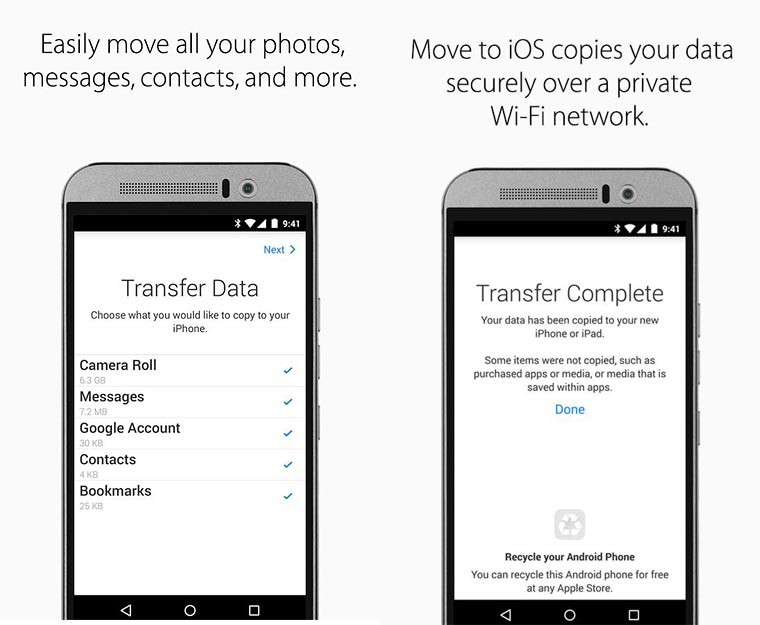 Cupertino continues its aggressive efforts to win over Android users. Coinciding with today’s release of iOS 9, Apple has released 'Move to iOS' on Google's Play Store.

The app transfers Android data over a private WiFi network directly to an iPhone or iPad, bypassing the cloud. A unique code is provided during the process to establish a secure link between the two devices.

Here's how Apple describes the specifics of what will be transferred:

No need to save your stuff elsewhere before switching from Android. The Move to iOS app securely transfers all kinds of content for you: Contacts, Message history, Camera photos and videos, Web bookmarks, Mail accounts, Calendars.

In addition to transferring data, the app will take note of which apps a user has on their Android device and then add those apps to the user's iTunes wish list. Users can then download those apps later on their own, but account information from those apps will not be transferred.

Apple unveiled the app at WWDC 2015 in June. The company has set up a marketing page describing the transfer process where they encourage users to visit the Apple Store to complete the transition in case there are any issues.

Apple hopes to continue its gradual increase in U.S. market share as it continues to pressure Android's dominant position, while across Asia the company has increased its market share more aggressively. The app is currently available from Google's Play Store and is compatible with Android devices running at least Android 4.0. Apple will release its next iPhone, the 6s and 6s Plus, on September 25th.