In its monthly update, the Linux Mint project announced that it’s working on a new app called Web App Manager that’ll let users turn their favourite websites into stand-alone applications that can be found in the start menu and be pinned to the taskbar. The Mint team is developing the tool in collaboration with the Peppermint OS team which has built a similar tool before.

As things stand right now, the Peppermint team has a tool called ICE that lets you turn websites into web apps. In a thread on GitHub, the head of Linux Mint, Clem Lefebvre suggests that the ICE back-end be separated from the interface so that the Mint team and Peppermint team can use their own respective interface. This plan isn’t definite yet but has been suggested. 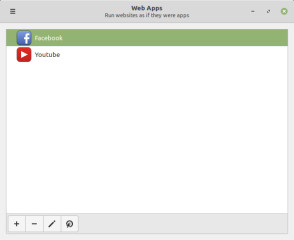 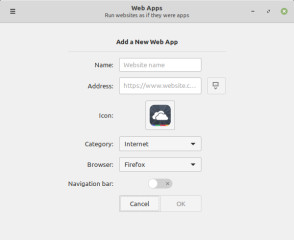 According to the images that have been made available, users will be presented with a list of web apps that they have already created. Users can remove and edit these or add a new web app. When creating a new web app, users will need to supply the app’s name, web address, an icon, which category it should be included in on the menu, which browser it should open in, and there’s a toggle to hide the browser's navigation bar.

Another nice aspect to these web apps is that they’re created with their own browser profile and appear in their own window. Not only does this give users help to separate their general browsing from their web app browsing but it also makes switching between apps on the Alt-tab selector a bit easier.

The Web App Manager is currently available for download but keep in mind that it is beta quality and isn’t fully translated. Around November or December when Linux Mint 20.1 launches, the new Web App Manager will probably be included.