Mycroft is the world’s first open source voice assistant, created and under development by a startup with the same name. Mycroft (the company) was founded back in 2015 with the goal of developing "AI for everyone", and because its software is open source, it can be installed in any device, from computers to fridges, wearables, TVs, and cars.

By mid-2015, the company launched a Kickstarter campaign for the development of the software and Mark 1, their reference, open hardware device. As can be seen from the company's introduction video below, Mycroft's skills range from answering factual questions and some of the basics, such as the date, time, weather, set alarms, or play the news, to playing music, radio, podcasts, or movies and videos on nearby displays and to control other Wi-Fi connected appliances. Also, it is capable of using sources like Wikipedia and Wolfram Alpha to gather information.

Currently, Mycroft (the software) is on pre-alpha and can run on Linux-based computers, on Mycroft Mark 1, and even on Raspberry Pi - which powers Mark 1. But the company expects to release Mycroft Core v18.02b by February 2018 with a more friendly and polished user experience, with a production release expected by February 2019 or 2020 at the latest.

The first Mark 1 units from the Kickstarter campaign were delivered last week to backers. Each device is priced at $129, in an effort to make it affordable enough so it can be used everywhere. Also, the company is trying to differentiate its product from others by increasing integration capabilities, as can be seen in the image below. 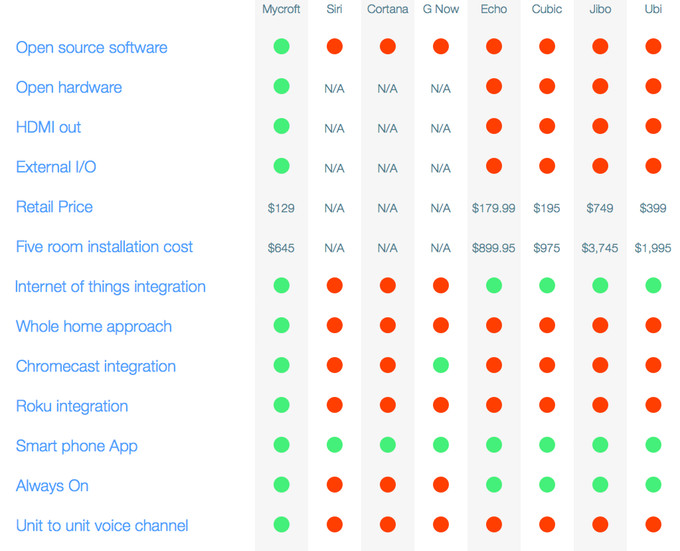 Finally, Mycroft uses open APIs "to process language, determine intent and obtain results". By doing so, the company claims cost reductions, because it is not necessary to develop a deep learning neural network, while enabling increased accuracy and usability. Regarding the collection of user information, Mycroft's CEO, Joshua Montgomery, has affirmed that it will only be used for improving the technology and after obtaining the user's permission.