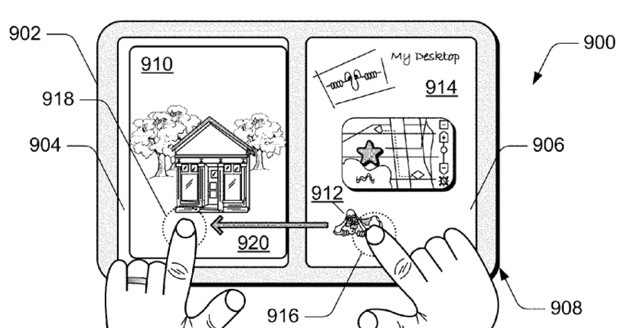 Microsoft's Windows 7 operating system was the first Windows OS to natively support touch screen interfaces. Although the feature has yet to be used by most PC makers and software creators, Windows 8 is expected to add even more touch screen features when it is released in 2012. Microsoft-News.com posted word that the company recently revealed it has filed for patents for several different types of touch screen interfaces.

A number of the patents have illustrations that show what looks like dual screen tablets to show off what Microsoft has in mind for new kinds of touch screen interfaces. One of them shows how you can hold an icon on the right screen and then tap on the left screen in order to move the icon from the right to the left screen. Another one of the patents shows how you might hold a document on one side of the screen with your finger and then slide your finger on the other screen in order to "bookmark" the page you are reading on the first screen.

All of these patent filings show that Microsoft is taking the touch screen interface that Apple made popular with its iOS devices more seriously. We should see a lot more of this kind of interface when Microsoft reveals more about Windows 8 at the BUILD conference in September.