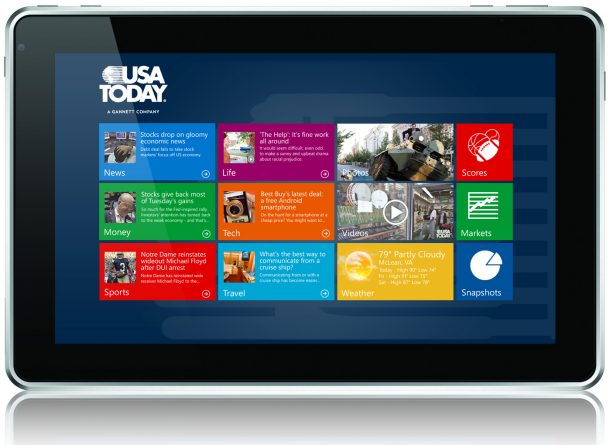 Windows 8 will have a number of features that have been seen in mobile operating systems including native touch screen support as well as a downloadable app store. Now it looks like Microsoft's next operating system is already generating interest from app developers. ZDNet.com has discovered that at least one app developer is working on native Windows 8 programs that will use the OS's new user interface, also known as "Metro".

Robbie Dillon, the art director at the Gannett owned newspaper USA Today, has updated his official web site with images of a Windows 8-based USA Today app that seems to be running on a tablet-like device. Dillon states, " ... this app is being built to take advantage of the touch-first, native environment of Windows 8, while retaining the look and feel of the Windows Metro UI and showcasing the content of USA Today." Since the final release of Windows 8 is still a ways off it's likely that the visual look of this prototype will change when the final version is released.

Yet another third party software developer that may be making apps for Windows 8 is Jetstream Software. ZDNet mentions in the same report that the company is working on an app that combines both social networking with traveling. It is not confirmed that this app is in fact being made for Windows 8, even though the company has made Windows 7 programs in the past.

It's likely that we will see more third party-created Windows 8 apps in September when Microsoft holds its BUILD conference in Anaheim, California.