If you’re an IT enthusiast or IT professional, you might be lucky enough to have access to either TechNet or MSDN to get the latest Microsoft software from an early stage, such as Beta or Release Candidate. But what if you’re the average user off the street who, every two to three years, will be in the market for a new computer or laptop? On purchase, you normally stick with the OS that came preloaded.

Up until October 26, that OS was 99.9% likely to be Windows 7, but now that Windows 8 has finally hit the stores, how will the average user deal with the changes the OS brings? 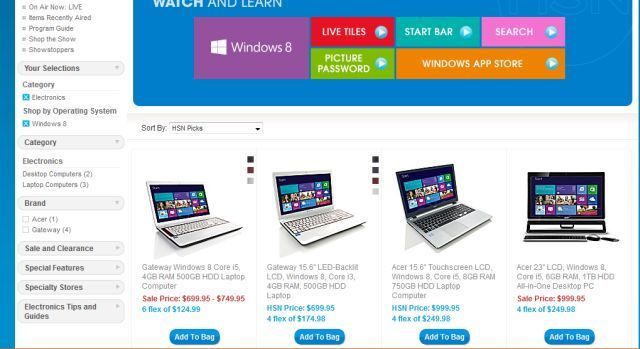 Well, when the Home Shopping Network (HSN) made a false start, selling PC’s with Windows 8 before the official launch date, it gave the users who were quick (or lucky) enough to purchase one the opportunity to review the hardware and the OS from a different perspective than that of the IT evangelists, enthusiasts or gurus out there. While they didn’t receive their purchase until after October 26th, the HSN faithful were quick to start posting initial thoughts and experiences on the hardware they bought.

Up until now, it’s been a love it or hate it approach to Windows 8. And that approach doesn’t look to have changed now that the OS is in the public’s hands. While there are people who stated their love for the whole package that they purchased, using words like “awesome”, “great” and “loved it”, there are users who have expressed their disdain for Windows 8, with one user stating that “The only back draw is learning the new windows 8, it's a real pain.” 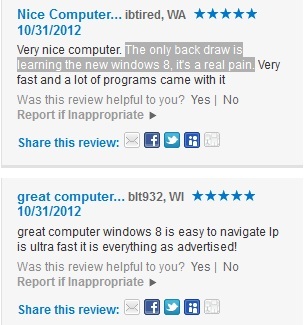 But finally, for all the anger, unhappiness or general discomfort, there are some users who have been thoroughly impressed:

Windows 8 scares me as I'm not used to not having a "start" menu to get to my All Programs. : The more I use it, however, the more I like it and this computer is...FAST!!!

This comment should put to shame all the technical users out there who have been so flippant in their ramblings about Windows 8. Even the IT professionals out there have been less than their title suggests when it came to expressing their opinion(s) around the OS; yes Notch, I’m looking at you!  It’s understandable that in 17 years people have got used to the Start Button and Menu across the Windows OS platform, but if an average user can put fears aside and do what IT professionals should be doing (learning new technology), maybe Windows 8 wouldn’t be as bad as some have made it out to be.

While this wasn’t a proper study and survey of the habits of the average computer user, it does help paint a picture of how Windows 8 is being received by the general populace.