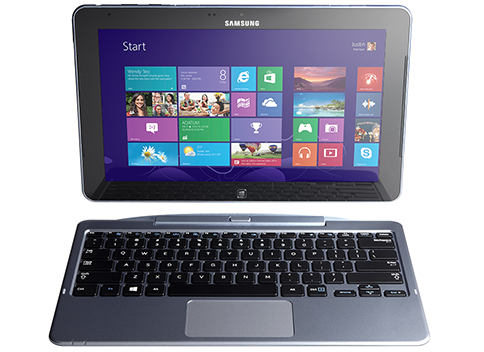 AT&T will officially start selling a Windows 8-based tablet device alongside its iPad and Android products later this week. The wireless carrier said that the Samsung ATIV Smart PC will go on sale in its stores on Friday, November 9th for $799.99.

Unfortunately, that price also means that AT&T customers will have to pay the full amount for the tablet up front, rather than have it be subsidized under a two year contract like AT&T's many smartphones. The 11.6 inch tablet, which comes with a detachable keyboard, will have a version of Intel's Clover Trail processor, with a clock speed of 1.5GHz. It will also have 64 GB of storage.

AT&T also said the tablet will have a trial version of Microsoft Office 2010, rather than a trial of the upcoming Microsoft Office 2013, as AT&T previously announced. Today's press release says that its version of the Samsung ATIV Smart PC will have the basic version of Windows 8 pre-installed, which means if users want Windows 8 Pro, they will have to perform a software upgrade. The tablet will also come with a cellular antenna to connect to AT&T's network.

AT&T had previously announced it would also sell the Asus Vivo Tab RT, running on Windows RT, later this year. However, today's press release from AT&T made no mention of the Asus tablet.