The launch of Windows 8 later this year will also signal the launch of a ton of apps made especially for the operating system's Metro interface. In a new post on the official Windows 8 app developer blog, Microsoft's David Tepper gives some advice on how Metro-based app creators can improve the performance of their software.

The highly technical post goes into a number of different tips that developers can uses to speed up performance in their Windows 8 Metro apps. Tepper states that users expect apps in Windows 8 to be very responsive to the new Metro touch screen user interface. He adds:

We invested a lot of time in the engineering teams thinking about how we can ensure the performance of Metro style apps. We have learned what we can do in the platform to deliver on fast and fluid performance and have also learned what works and what does not work in building apps that deliver great experiences.

One of those tips is reducing the amount of time between activities on a Windows 8 Metro app for a user to complete a task. That will help with a user's perception about the performance of that app. Another tip is to add some kind of progress bar when a task is activated in an app. Tepper says that can also help with how a user imagines how long an app accomplishes a task, saying, "The amount of time users are willing to wait for the work to complete is far higher because there is no uncertainty." 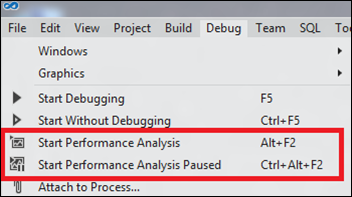 App profiling can also be used to gauge the responsiveness of an app. Visual Studio 11 has a app profiling tool, shown above, that developers can access to create a report that records the times for an app's various functions. Tepper gives an example of how this app profiling tool works:

A few weeks before the release of the Windows 8 Consumer Preview, I was using one of the apps and noticed that my laptop was getting hot and the fans started to turn on. Working with the owner of the app, we used profiling to identify some code paths that were causing large amounts of unnecessary CPU usage, which were then fixed. The difference was immediately noticeable, and other app scenarios (such as snapping) were also improved by the changes.

Other performance tips in the blog post include making sure a Windows 8 Metro app doesn't use much memory when it is suspended, managing the amount of memory used when the app is active and running and conseving a PC's system resources such as not running any animations, audio or video in an infinite loop.