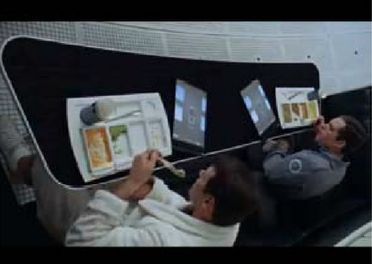 Nearly a year ago, Samsung tried to make the legal argument that Apple had stolen the design for its iPad tablet by looking at the electronic pads used by the astronauts in the 1968 classic sci-fi movie 2001: A Space Odyssey. It was a bit of a long shot, and today it seems that Samsung's efforts on that front have failed.

AllThingsD.com reports that Judge Lucy Koh has ruled that Samsung can't use the "taken from a movie" premise as an argument against Apple in the currently running trial between the two companies. The trial will continue on Friday with Apple Senior VP Phil Schiller scheduled to take the witness stand.

Samsung has certainly been creative in presenting its evidence to the jury, including a claim that Apple took the design of the iPhone from Sony. Judge Koh also ruled that Samsung could not present that viewpoint to the jury. Samsung later released that evidence to members of the media, which didn't make Apple's law team very happy. Judge Koh was also upset and demanded who at Samsung authorized the release of the evidence.

All in all, it doesn't sound like Samsung's law team and Judge Koh have got off on the right foot and it should be interesting to see how the trial moves forward with a lot of Samsung's arguments suppressed.