Cortex-A17, the successor to the Cortex-A9 processor for mid-range devices has been launched by British semiconductor company, ARM and is expected to be available in mobile devices towards the end of the year.

ARM has announced through a press release, that it will bring the big.LITTLE technology seen in high-end processors from Samsung and Qualcomm to the mid-range devices using the Cortex-A17. Along with the new processor, the company has also announced the Mali-T720 GPU, Mali-V500 video processor and Mali-DP500 display processor. ARM is expecting to see implementations higher than 2.0GHz from chip designers based on the Cortex-A17 to deliver high performance and efficiency. 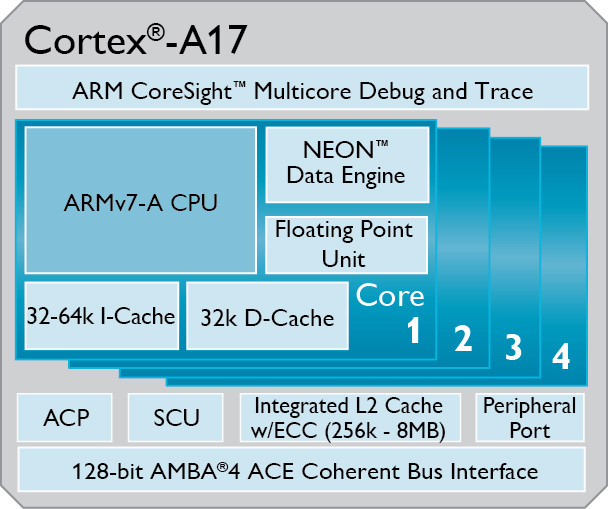 The Cortex-A17 is based on the ARMv7-A architecture which supports nearly 1 million applications. ARM has optimized the A17 for use on a variety of devices ranging from mobiles, smart TVs, Over-the-top devices, connected cars and other such connected devices. In addition to this, the Mali-T720 GPU with support for OpenGL ES 3.0, OpenCL and RenderScript will bring premium multimedia experience to affordable smartphones and tablets.

Although, ARM is pushing to launch devices based on Cortex-A17 in the market by 2015, partners such as MediaTek have already committed to bringing devices to the market in the second half of 2014.