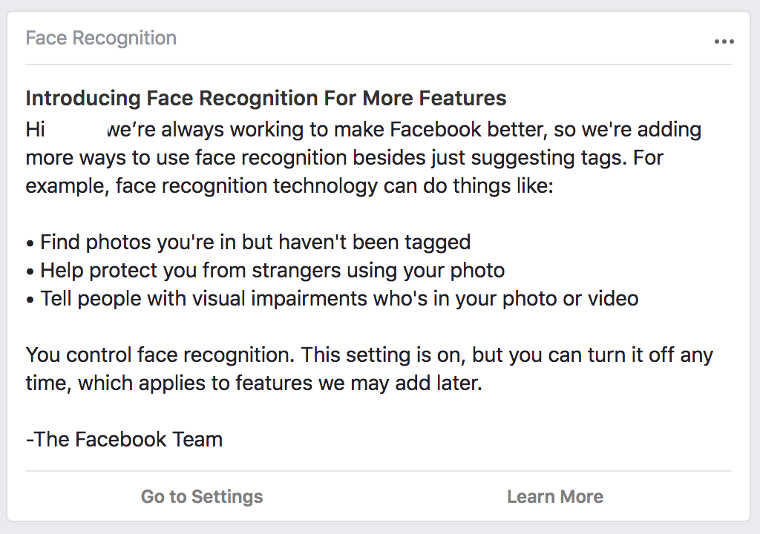 Facebook is now informing users around the world that it’s rolling out facial recognition features. In December, we reported the features would be coming to the platform; that roll out finally appears to have begun. It should be noted that users in the European Union and Canada will not be notified because laws restrict this type of activity in those areas.

With the new tools, you’ll be able to find photos that you’re in but haven’t been tagged in; they’ll help you protect yourself against strangers using your photo; and Facebook will be able to tell people with visual impairments who’s in their photos and videos. By default, Facebook warns that this feature is enabled but can be switched off at any time; additionally, the firm says it may add new capabilities at any time.

In its initial statement, Facebook said the following about the impersonation protections it was introducing:

“We want people to feel confident when they post pictures of themselves on Facebook so we’ll soon begin using face recognition technology to let people know when someone else uploads a photo of them as their profile picture. We’re doing this to prevent people from impersonating others on Facebook.”

While Facebook may want its users to “feel confident” uploading pictures online, it will likely give many other users the heebie-jeebies when they think of the colossal database of faces that Facebook has and what it could do with all that data. Even non-users should be cautious which photos they include themselves in if they don’t want to be caught up in Facebook’s web of data.

Have you been notified about this feature? How do you feel about it, does it go too far or do you find it convenient?