Even a security issue delaying the vote could not save net neutrality. Brace for impact.

In a 3-2 vote along party lines, the FCC approved Chairman Ajit Pai's proposal to again classify I﻿nternet service providers as information services under Title I guidelines. The vote repeals a 2015 ruling by the Obama-era FCC that had designated ISPs as utilities, which under Title II, provides more stringent rules for ISPs to follow. It had, in essence, kept the internet open to all, and immune from throttling or restricted access.

"I dissent because I am among the millions outraged, outraged because the FCC pulls its own teeth advocating responsibility to protect the nation's broadband consumers. Some may ask 'Why are we witnessing such unprecedented groundswell of public support for keeping the 2015 net neutrality protections in place?' Because the public can plainly see that a soon to be toothless FCC is handing the keys to the internet, one of the most remarkable empowering, enabling inventions of our lifetime, over to a handful of multibillion-dollar corporations, and if past is prologue, those very same broadband internet service providers that the majority said you should trust to do right by you will put profits and shareholders above what is best for you."

Among other things, she also blasted the lack of consumer input allowed, as well as the lack of reported ISP violations of trust that happened in the past.

Commissioner Michael O'Reilly said the research has been thorough, and he supported the ruling. He condemned the "fearmongering," and said that it is not the FCC's role to protect against "hypothetical harm."

"In all this time, I have yet to hear recent unquestioned evidence of demonstrable harm to consumers that demand providers be constrained by the completely flawed regulatory intervention," he said. "I still cannot endorse guilt by imagination." 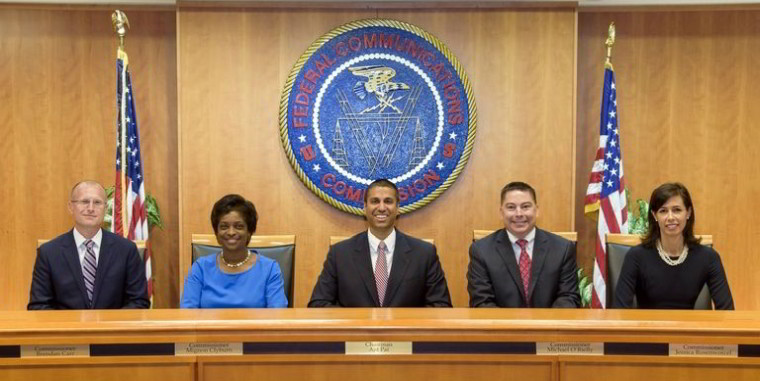 Commissioner Brendan Carr celebrated the new order as a return to the "light-handed touch" the FCC should have in regulation. He accused opponents of misrepresenting what Title I and Title II rules actually do:

"Some claim that Title II is preventing ISPs from increasing their prices for broadband, so they will see a spike immediately after this decision. The FCC emphasized that Title II involves 'low code, no regulation.' Some claim that Title II is preventing ISPs from blocking, throttling or engaging in private paid prioritization. Also not true. The DC Circuit said Title II allows ISPsto 'block websites and throttle applications chosen by ISPs and to filter content in the fast lane since low lines based on ISPs' commercial interest provided that they disclose those practices.' In other words, Title II is not the thin line between where we are right now and some Mad Max version of the internet. There are reasons that consumers enjoyed a free and open internet long before Title II. There are reasons why consumers are free to access any website or online content of their choosing, and those reasons will continue to hold true long after our Title II experiment ends today."

Commissioner Jessica Rosenworcel was the other dissenting vote, citing a lack of public input, lack of trust in ISPs ability to self-regulate, and the compromised commenting system on the FCC site as some of her main reasons for voting no to repeal. She also hammered on the issue that most Americans don't have a choice of an internet provider.

"What recourse do consumer have?" she asked. "We are told 'Don't worry, competition will save us.' But the FCC's own data shows that our broadband markets are not competitive. Half of the households have no choice of broadband provider. So if your broadband provider's blocking websites, you have no recourse. You have nowhere to go."

Chairman Pai cast the deciding vote, and given that it was his proposal and the video below that was released yesterday, the "yes" vote for repeal was a foregone conclusion. Several times during his commentary, he referred to Title II as "heavy-handed" and a threat to consumers.

At that point, the proceeding was interrupted "on the advice of security" but when he returned, Pai made clear his stance:

"Let's be clear. Returning to the legal framework that governs the internet - President Clinton's pronouncement in 1996 to 2015 - is not going to destroy the internet. It's not going to end the internet as we know it. It is not going to kill democracy, not going to stifle free expression online. Stating these propositions alone does not demonstrate their absurdity. Our internet extremes before 2015 and our internet experience tomorrow will prove them so. Simply put, by returning to the light touch Title I framework, we are helping consumers and promoting competition. Broadband providers will have stronger incentives to build networks, especially in unserved areas, and to upgrade networks to gigabit speeds and 5G."

The final vote was then cast.

With net neutrality eliminated, several consumer organizations, namely Common Cause, Free Press, the Internet Association, and Public Knowledge, have vowed to go to court to fight a repeal decision, even as early as today. Whether the courts will agree to wade into the issue is a mystery, given the FCC's authority to make, change and even repeal its own rules.

While there are arguments both pro and con for the repeal, those that use the internet on a regular basis have been loud in their opposition to it. There is concern that ISPs will use the laxer rules to begin to package access to internet websites such as Facebook, Netflix and even news sites for increased prices. Failing to pay, opponents say, could result in throttling or even blocked access.

For their part, ISPs have vowed that users need not worry because they have no plans to change the way they operate. However, opponents can point to numerous times where ISPs have already tried to skirt the previous rules, usually resulting in fines or severe user backlash.

The FCC ruling supposedly returns enforcement over the Title I rules to the Federal Trade Commission in protecting consumers, but an AT&T suit in the Ninth Circuit Court has thrown the FTC's ability to enforce the rules into question.

Update: The response to the repeal has been swift as politicians, both Congressional and state, are revealing their next move to revive net neutrality. You can watch the whole discussion here.