One of the many criticisms of Windows 8 is that there isn't a proper tutorial bundled with the operating system that instructs people new to the OS on how to do basic tasks. HP is setting out to rectify this with their own tutorial app that will be presumably included with their PCs, but also available through the Windows 8 Store - even for people who haven't purchased HP hardware. 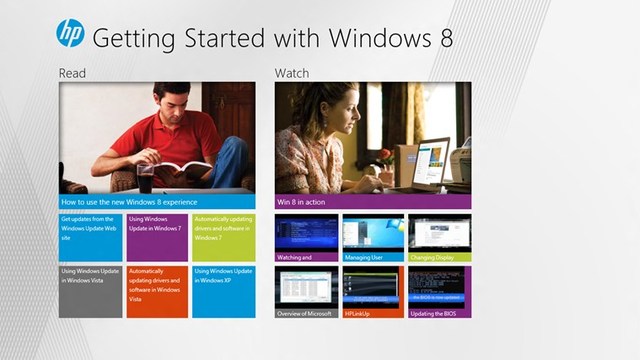 Currently the app is mostly tutorials made for Windows 7 and older OSes, but the description of the app in the store does say that a bunch of critical features will be explained in detailed through their "Getting Started with Windows 8" app. Here are just some of the features that HP will guide you through using the application:

You can also see from the screenshot above that the app not only includes text tutorials, but also video guides for those who understandably can't be bothered reading lengthy guides, or who need to see things in action to grasp the concepts.

Once the app gets fully populated with Windows 8 tutorials it should be a great guide for users new to Windows 8, and it will hopefully answer many questions that people upgrading might have.