Microsoft knows that it is entering the tablet market late and because of that it needs to help developers migrate from existing platforms to their own. The natural target for this would be iOS as that segment has the largest market share and the developer community that Microsoft hopes to tap.

To that end, Microsoft has put together a guide to help developers migrate from iOS to their Windows 8 environment. The post can be found here (via Michael Gillett) and we have included some of the highlights below.

The general gist of the post is that iOS and Windows 8 accomplish the same task with different perspectives. For this, Microsoft created a comprehensive guide to break down each feature and show how iPad functionality is performed within Windows 8.

The application used for the walkthrough purposes is a photo journal that allows the end user to view and manages their photos online within a timeline. There are several areas that Microsoft focuses on such as search, content manipulation, navigation, and gesture support. 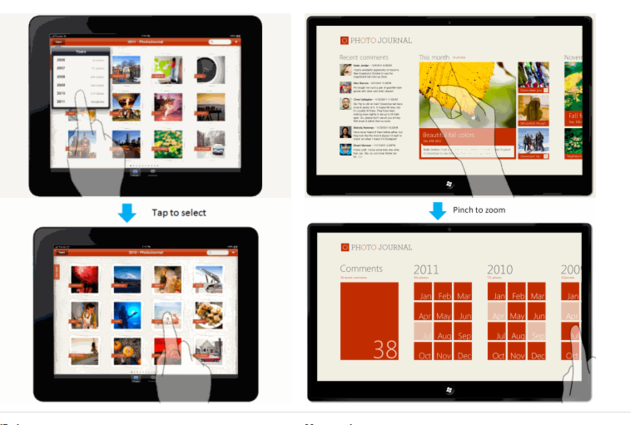 It should not surprise you that Microsoft also sneaks in a few reasons why Windows 8 is better than iOS for applications and it also shows in their images with what is noticeably larger screen than the 9.7in iPad. Of course, you have to remember that iOS is purely a mobile OS whereas Windows 8 is both a desktop and tablet OS.

If you are a Windows 8 developer and have previously worked with iOS, the guide should prove to be valuable in drawing parallels between the two platforms to better optimize your application and improve workflow.