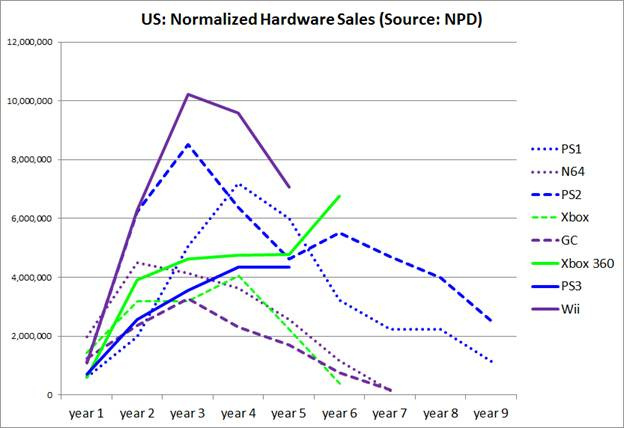 With the entire video and PC game industry preparing for E3 2011 this week, Microsoft decide to take some time today to announce some new sales statistics for its Xbox 360 game console. The Major Nelson web site has posted up some interesting numbers along with a graph (shown above) that shows that Xbox 360 sales continue to increase even though the console is now nearly six years old. The data, provided by the NPD Group, shows that other consoles relased in the past 15 years have seen flat or declining sales growth during that same time period.

Microsoft now says that 55 million Xbox 360 consoles have been sold worldwide. It is also the number one best selling game console here in the US in 2011 and has been the best selling console for 10 of the last 11 months. In the first four months of 2011, Microsoft says it has seen a 29 percent increase in year-over-year sales which is triple the amount of growth of Sony's Playstation 3 console. It also said that each of its nearly 35 million Xbox Live users have logged an average of almost 60 hours a month using the online service. The total amount of time logged by all those Xbox Live users is a whopping 2.1 billion entertainment hours.

Microsoft is expected to make lots of new announcements during its pre-E3 2011 press conference on Monday, June 6 in Los Angeles including new games, new support for its Kinect motion controller camera and more updates to its Xbox Live service.