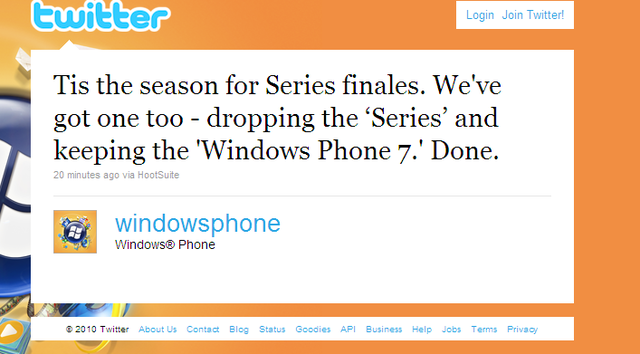 Microsoft has announced that it will be renaming its Windows Phone 7 Series to a much more manageable, Windows Phone 7.  The announcement was made over the company's official Twitter page and is a marked improvement over the old naming convention.

While no official reason is given, it's likely to say that the old name was far too long for an OS.  The 'Series' at the end was ambiguous and didn't clearly state if it was an umbrella name for several platforms or if it only stood for one version of the OS.

The platform is expected to launch by the 2010 holiday season which will give Microsoft more time to evaluate consumer feedback.  Dropping 'Series' from the name is a welcomed changed that will help define the platform going forward.