You may like or you may hate the "Modern" UI in Windows 8, but there's one thing that's very clear; it was made for touchscreens first and foremost. Yes, you can still use a keyboard and mouse with the user interface but there's no denying that your fingers are the best way to use Windows 8 when you interact with an app or the Start screen. 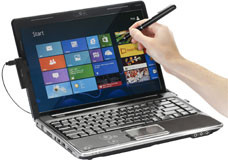 But what if you have upgraded your old PC to Windows 8, or you simply bought a new Windows 8 desktop or notebook without a touchscreen? You still have to deal with the "Modern" UI. Enter Targus, which announced this week plans to offer a Touch Pen that connects to a non-touchscreen PC and enables its users to better interact with the "Modern" interface.

Maximum PC reports that the Targus Touch Pen uses a receiver that connects to a PC (presumably via a USB port) and allows the pen to "touch" any PC monitor so people can better interact with the new Windows 8 UI. Targus says that the pen won't need any extra software to be installed.

The device won't be out until the second quarter of 2013 and it will cost about $100 when it does arrive. Yes, that's a bit pricy and you have to decide for yourself if you want to go this route or perhaps use a software solution such as Start8, Pokki or RetroUI that costs little to nothing to download and use.