In February, the Chinese-based company ZTE officially announced its first Windows Phone-based smartphone, the ZTE Orbit. It's been a while since it was announced, but now there's word that the smartphone is finally available for sale in the US.

US Cellular, without any fanfare, has posted up word that it has a Windows Phone 7.5 product from ZTE available for its customers for $79.99, after a $100 mail in rebate and with a contract. It's called the ZTE Render, and it appears to be the same product as the ZTE Orbit, just with a new brand name. 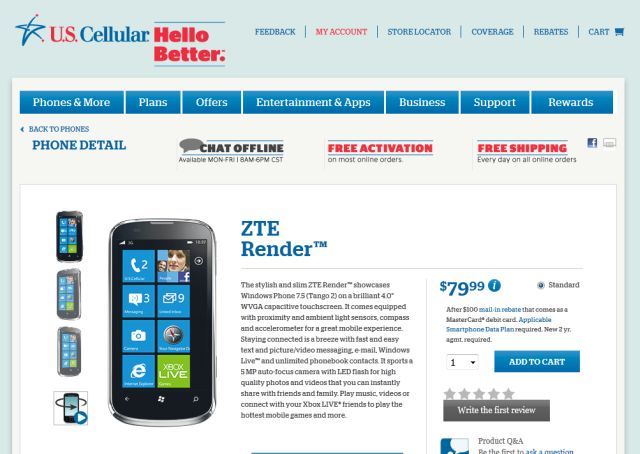 The ZTE Render has the Tango 2 build of Windows Phone 7.5 installed, with a four inch screen, a 1 GHz processor, 512 MB of RAM, four GB of storage and a five megapixel rear camera. In other words, this is definitely an entry level Windows Phone product.

This will likely be the last "new" smartphone released in the US with Windows Phone 7.5 installed out of the box. Microsoft and its hardware partners such as Nokia, Samsung and HTC are expected to launch Windows Phone 8-based devices in the next few weeks, perhaps in early November.