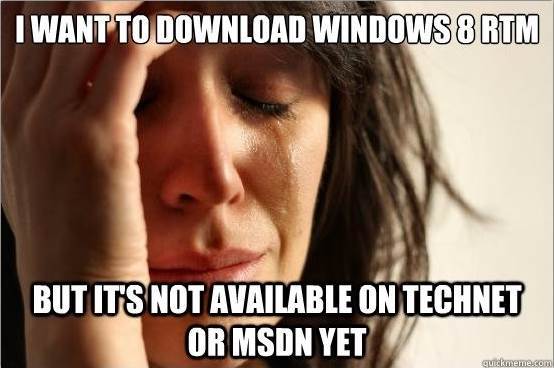 Not long to wait now

Well it's finally here, the day TechNet & MSDN subscribers will be able to download Windows 8, and activate it legally.

Microsoft didn't announce what time the images would start showing showing in the downloads section, but we're guessing it will be around 9AM PDT (12PM EST, 1600 UTC) which is when Microsoft HQ in Redmond starts a new day.

Also as a reminder, Microsoft changed their EULA in July this year which quite drastically reduced the number of product keys that can be requested:

Beginning in mid-March 2012, subscribers to TechNet Subscriptions (excluding TechNet Standard which are entitled to 2 keys per product) may access a maximum allocation of three (3) product keys for Microsoft Office and Windows Client products in connection with their subscription. The allotted keys may only be used for software evaluation purposes. Once the maximum keys have been activated, no more keys will be made available. Additional product keys may be acquired through the purchase of an additional subscription. Thanks Warwagon

Yesterday we asked you to vote if you would be getting Windows 8, and surprisingly over half voted they wouldn't, with just 45% stating they would (of the 249 that bothered to vote).

This forum thread also paints a picture that Windows 8 doesn't seem to be generating as much excitement as the Windows 7 release did, which is also a bit disappointing.

Once again, here is the release timeline:

Check out this timeline of the Windows 8 release, including the ensuing leaks; and here for the forum discussion on today's availability.