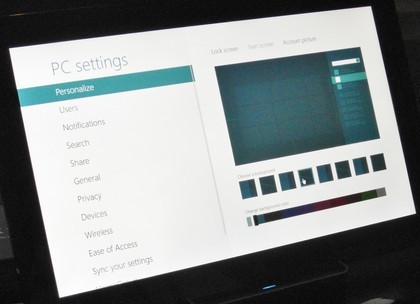 Windows 8 may be rapidly approaching its beta version in late February, but when Microsoft finally decides to release it, users may not be happy with one of the company's customization choices. TechRadar.com reports that, according to Windows 8 director of communications Chris Flores, users won't be able to apply a picture as a background for the Windows 8 Metro start screen.

Flores says that the reason for this choice is that any photograph would not be able to stretch and scale as Metro interface users add more tiles and groups to the Start Screen and then zoom in and out of that screen's interface. In addition, any picture would be covered up by the Metro-style tiles.

So what can you do with the Start Screen background in Metro on Windows 8? As you can see in the picture above, You can choose from eight different styles of background in the beta version and then alter the color of that style via a color scroll bar. The colors are also very specific to avoid users choosing strong colors that would obscure text.

The article also says that the beta version will allow mouse users to have more control of the Metro user interface. You will be able to use your mouse's scroll wheel to move the Start Screen's interface from side to side, among other features.

You can also shut down Metro apps via a touch screen without going to Windows 8's Task Manager in the forthcoming beta version. When you want to stop a Metro app from running, simply drag your finger from the top of the screen to the bottom to close the Metro app. The Beta is due out late-February for public release.