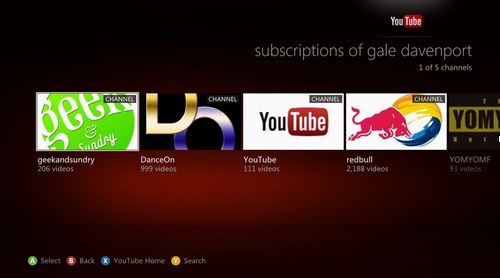 In December, Microsoft added a YouTube app for owners of its Xbox 360 console as part of the company's massive increase in non-gaming media apps for the hardware device. Today, Google announced that a major update for the YouTube app is now available to download for Xbox Live Gold subscribers.

In a post on the YouTube Google + page, the company said, "Achievement Unlocked: The YouTube app on Xbox is now up to 5X faster, and includes channels with official music videos."

Google has been aggressive of late in adding YouTube apps to a number of current game consoles. The app was released for Sony's PS Vita earlier this year and a couple of weeks ago, Playstation 3 owners could also download their own YouTube app. The PS3 version also added support for remote control access via a smartphone, but there is no such support, at least not yet, for the Xbox 360 app.

At E3 2012, Microsoft showed off Xbox Smart Glass, which will allow remote access to the Xbox 360 and many of its apps and games via smartphones and tablets. It's currently unknown if Smart Glass will support the Xbox 360 YouTube app when the feature is released later this fall.