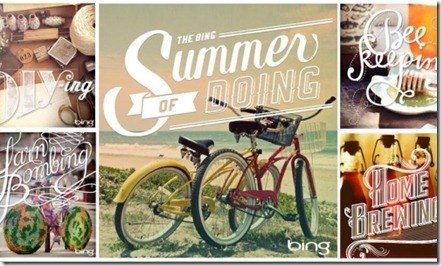 On Monday, Microsoft's Bing division was teasing us about an announcement that was to be made later that day. We thought it might have something to do with Microsoft's then mysterious press event but in the end, the reveal was about the Surface tablet. So what is Bing up to this week? Why, a contest, of course.

On Monday, Bing announced the Summer of Doing giveaway; it is giving out weekly prizes to Bing users. People enter the contest by searching for a new word every day on Bing. You then share that word with friends on Facebook and after that, you get an entry into the contest to win the weekly prize.

The first such prize is for $1,000 in DIY items, including a gardening set, a cheesemaking kit, a homebrewing kit (changed to a soda kit if the winner is under 21) and $800 worth of credits to take DIY courses at Skillshare. The official Bing blog says that there will be other themes and prizes in the coming weeks, including "eating, celebrating, giving back, wander-lusting, riding, jamming, and more."

The contest is also a way to promote DoSomething.org, a non-profit group that tries to encourage others to volunteer in helping their local communities.