Mozilla, creators of the Firefox browser, announced a project yesterday which they aim will make web development, or "webmaking" as they call it, easier for beginners. Mozilla Thimble is a relatively simple online HTML/CSS editor which aims to introduce users to website coding, all within the comfort of a web browser, without the need to download software. 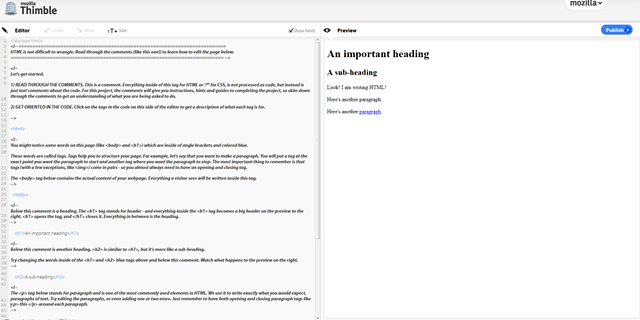 Thimble features a coding panel on the left, which when edited, displays an instant preview of the page on the right, somewhat different from other editors which focus on a drag-and-drop approach. The site also offers various pre-made webpages which users can edit and add to, useful for those perhaps who daunt writing a html tag.

If you're looking to create a whole website with various fancy features, there's no point in looking here though. Mozilla has stated that users can only use images used on sites like Flickr or Photobucket and won't allow wanna-be developers to upload their own files to the Mozilla servers.

The release of Mozilla Thimble conincides with an update to the company's Webmaker project which aims to "help millions of people move from using the web to making the web." The online editor joins Mozilla's other tools, X-Ray Goggles and Popcorn.