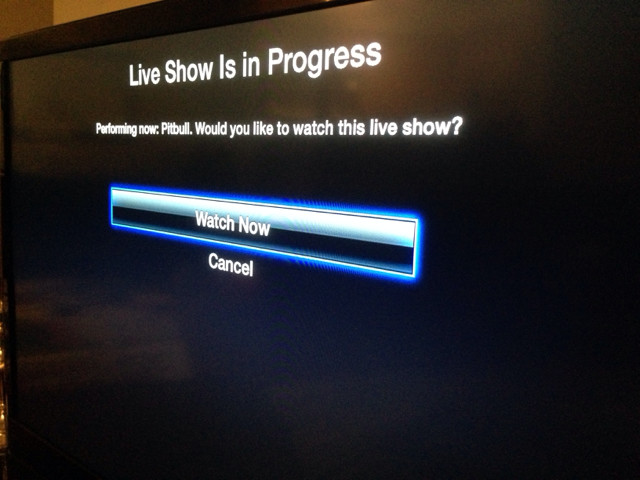 According to 9to5Mac, the world received its first preview of what notifications might look like on an Apple TV. During Apple's live stream of the iTunes Festival at SXSW it prompted Apple TV users to tune in to the live stream that was in progress at the festival. The notification (seen above) is a simple and generic message that follows the overall aesthetics of the current Apple TV menu. The prompt simply states "Live Show Is in Progress, Performing now: Pitbull. Would you like to watch this live show?" with a "watch now or cancel" option. Naturally, if you choose to watch now, it will hop into the live stream and if you decline it will resume what you were previously watching before being interrupted.

While we have yet to see how Apple will take full advantage of these notifications, it's evident that this notification system could tie in to future products and updates. Apple will no doubt improve the notification system by making them more elegant and streamlined in the future. But, only time will tell and with rumors of a new Apple TV in 2014 this new style of pop up notification could just be a preview of what might appear later this year.