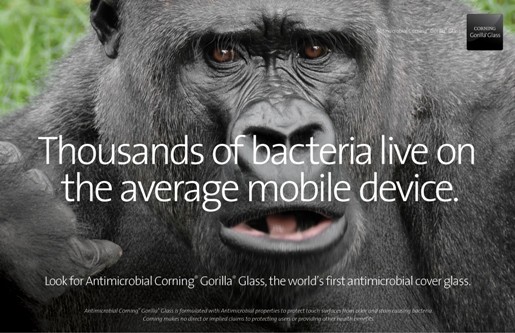 While in the past, cell phones have compared poorly to other stereotypically dirty surfaces (studies have found more harmful bacteria on smartphone screens than on toilet seats), Corning plans to address this problem by infusing their glass with ionic silver, an “antimicrobial agent.”

Its new smartphone glass will inhibit the growth of “algae, mold, mildew, fungi, and bacteria,” and the special properties of the glass will, Corning claims, last “for the lifetime of the device.” Corning also assured smartphones users that they need not worry about decreased performance as the “precise control of silver levels” enables the company to maintain the “mechanical, optical, and dielectric properties of Corning Gorilla Glass.”

Although Corning’s invention will likely usher in an era of antimicrobial screens, they are certainly not the first to recognize the potential germ-fighting properties of silver. Many hospitals frequently rely on silver-alloy surgical instruments because of their anti-bacterial properties. That being said, a lack of consensus on the germ fighting powers of silver compounds suggests that Corning’s newest creation may ultimately be more effective at generating buzz than fighting bacteria.

Either way, this writer looks forward to a future in which the lowly smartphone begins to climb the hierarchy of dirty things. Today, the toilet seat. Tomorrow, the kitchen floor. Only the sky is the limit! (just ignore the pollution).