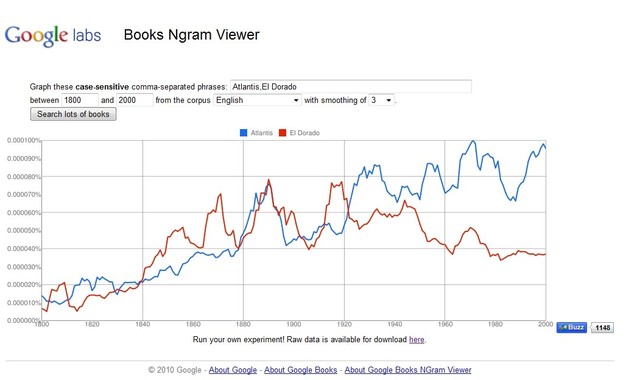 Google has quietly released Ngram, a free tool that allows users to sift through 500 billion words contained in nearly 5.2 million books published between 1500 and 2008 in English, French, Spanish, German, Chinese and Russian. The tool can compare words and phrases and provide a year-by-year breakdown of when and how often they appeared in print. The entire dataset that powers the tool is also available for download.

The tool is expected to prove invaluable for researchers and academics, and provides a fascinating window into the past for the rest of us. For example, a quick search shows that references to communism peaked around 1960 at the height of the Cold War, while the word ''internet'' only appeared sporadically in print before usage skyrocketed in the late 1980s.

According to the New York Times, the project was a collaboration between Google and Harvard, and Erez Lieberman Aiden, a junior fellow at Harvard's Society of Fellows told the newspaper the goal was to make it simple for people to browse cultural trends as shown in books.

''We wanted to show what becomes possible when you apply very high-turbo data analysis to questions in the humanities,'' he said.

On the tech front, Microsoft will be pleased to know that ''bing'' first appeared in print in 1650, and it will come as no surprise to learn that ''apple'' was around as early as the late 1500s. Sadly, ''Neowin'' does not appear once in the centuries of text indexed by the tool. Those looking for a special treat should try entering the phrase ''never gonna give you up'' into the tool.