Google has announced an update to the Search app which will allow users to get results from various installed apps and app suggestions for relevant content when using the Android app or Chrome browser on the platform. 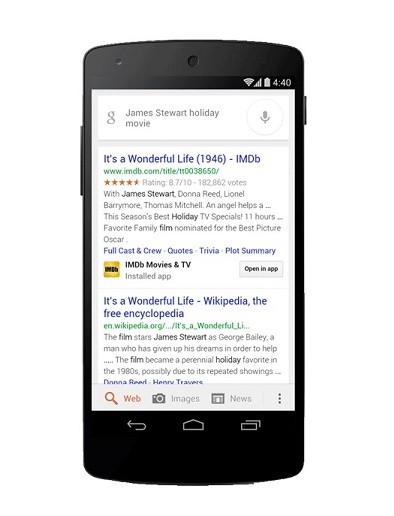 Every time a user searches for something, Android will now look for the relevant application for the search term and provide suggestion to "Open in app" as part of the new update. Incase an app is not already installed by the user, then Search would suggest to install the relevant app. It must be noted that the "Open in app" button may not appear as soon as an app is installed and may take up to 2 days to appear.

Apps that are currently supported include AllTrails, Allthecooks, Beautylish, Etsy, Expedia, Flixster, Healthtap, IMDb, Moviefone, Newegg, OpenTable, Trulia, and Wikipedia. Google is working with developers to increase the suggested apps and expects to have support for more apps over the coming months.

Google is in the process of rolling out this functionality through the updated Search app on Play Store, Chrome and default Android browser. The new features are currently only available to users in the United States who have their language set to English. The good news for users of Android 2.3 and 4.0 is that they will also get the updated app unlike Google Now which was released for 4.1+ devices.